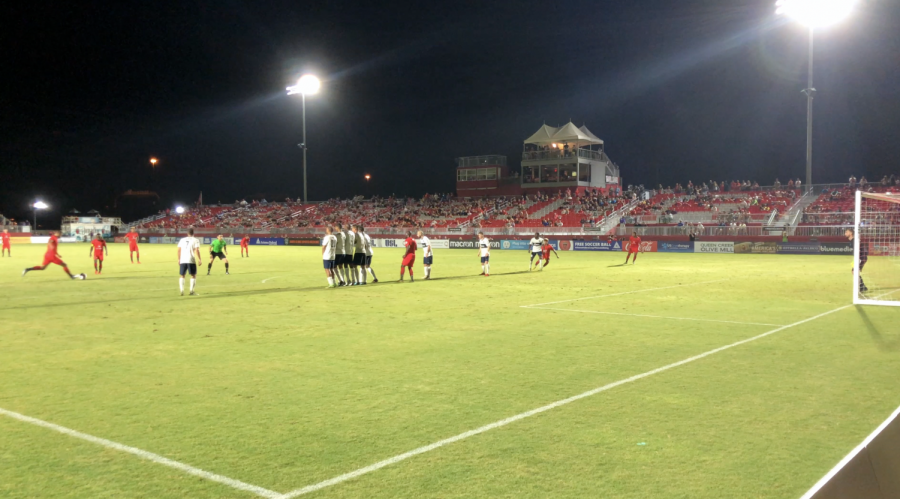 During the hiatus, PRFC took six of nine points and clinched their second ever USL playoff birth.

With the win over Saint Louis FC, the Rising secured a top-four finish in the western conference, which secured a first round home playoff game—the first in the club’s history.

“Hopefully we can get 7,000-8,000 people for that game, but we still have three more to play,” said Rising manager, Rick Schantz, after the game. “I think our guys have set their sights on more than one home game.”

Also returning after almost five months of recovering from an injury was captain and part owner of the team, Didier Drogba.

“First game back after what, four months?” Schantz said.

“I think he (Drogba) would be honest and tell you that it took him probably 20-30 minutes to get his legs back under him a little bit. We were struggling to find his feet. There wasn’t a lot of connection with him, but you could see it in the second half. That’s what superstars do. Moments that you really need him, he can push himself a little farther.”

In front of a sellout crowd, Drogba displayed the vision and touch he had during his Chelsea days.

In the opening minute of the game, Drogba played a long, crossing ball along the ground to teammate, Shaft Brewer Jr., who set up midfielder, Gladson Awako, for a right-footed curling shot that was saved by Saint Louis goalkeeper, Tomas Gomez.

Rising vice-captain and forward, Solomon Asante, got his first chance at goal in the 20th minute when his 40-yard run resulted in an angled shot, but Gomez had his near post covered to make his second save of the game.

Although the scoreboard showed 0-0 at halftime, the Rising dominated both ball possession and shots, as SLFC did not have a single shot in the first half.

Saint Louis made the most out of their only shot of the game in the 49th minute when midfielder, Joey Calistri, set up teammate, Wal Fall, with a 25-yard one-timer that beat PRFC goalkeeper, Carl Woszczynski, but was denied by the post. Unfortunately for Fall, this would be his last touch of the ball, as he would leave the game with a leg injury.

Following the woodwork denying SLFC’s of a goal, the ball fell to Asante’s feet and Phoenix was immediately on the break. The counterattack ended in a 30-yard screamer from Drogba that required an acrobatic save from Gomez to keep the score line at 0-0.

In the 68th minute, Drogba once again set up his teammate with a cross along the ground that resulted in an Asante shot at the top of the box that was saved yet again by Gomez.

Three minutes later, Rising substitute and forward, Billy Forbes, played another ground cross to set up Awako for a one-timer at the top of the box, but the Phoenix number 10 blasted it over the crossbar, relieving Saint Louis of the pressure and keeping the score tied at 0-0.

In the 81st minute, it looked like Phoenix would take the lead when Gomez misread the height of a corner, leaving his goal exposed, but PRFC defender, Amadou Dia, whiffed on the header, making it audibly evident that the crowd was becoming weary of a possible draw.

“The most important part is the zero against us,” Schantz said.

“We’ve talked about that all along. The back four and Carl (Woszczynski) and the midfield, they’ve really started to shore up what they’re doing. We know we’re going to score. There’s so much world class talent on this team. Soloman (Asante) is one of the most dangerous players I think I’ve ever coached or seen in my career and then of course Didier’s (Drogba) free kicks, Cortez. We know we’re going to score, so keeping the other team off the scoreboard is the most important.”

With the pressure mounting on Rising for a chance to win the western conference, a Saint Louis turnover at the top of their own box resulted in a Billy Forbes left-footed goal to give the Rising a 1-0 lead in the 82nd minute.

“We’re trying to take it one game at a time. It’s tough. Before this game, that’s what we said, ‘We win today, we get a home playoff game.’ It’s the first one in team history. That’s great for us. Next Saturday we go again, three points, hopefully get closer. The great thing is we control our own destiny. We win the next three, we win the west.”

Phoenix forward leading goal scorer (17) Cortez, came on for Drogba in the 90th minute, and with his first touch of the game, Cortez curled a left-footed free kick in the back of the net to secure the 2-0 win and put himself in the record books as the fifth player in USL history to score 50 career goals.

Phoenix Rising FC are now one win away from clinching a top two finish in the western conference that would result in a second-round home playoff game should they advance from the first round.

“I told them tonight before the game: ‘All we could do is clinch one game.’ So maybe next game we can clinch top two,” said Schantz during postgame. “It’s little goals to achieve instead of thinking too far down the road, so just one at a time.”

The team is also three wins away from winning the western conference that would result in homefield advantage throughout the entirety of the playoffs. The only team in all of the USL that would require PRFC to travel for a playoff game is MLS bound FC Cincinnati, but that would only be the case should both teams reach the final.

Two of the last three games remaining in the regular season are home field matches.