SCC’s production of Argonautika requires round the clock work 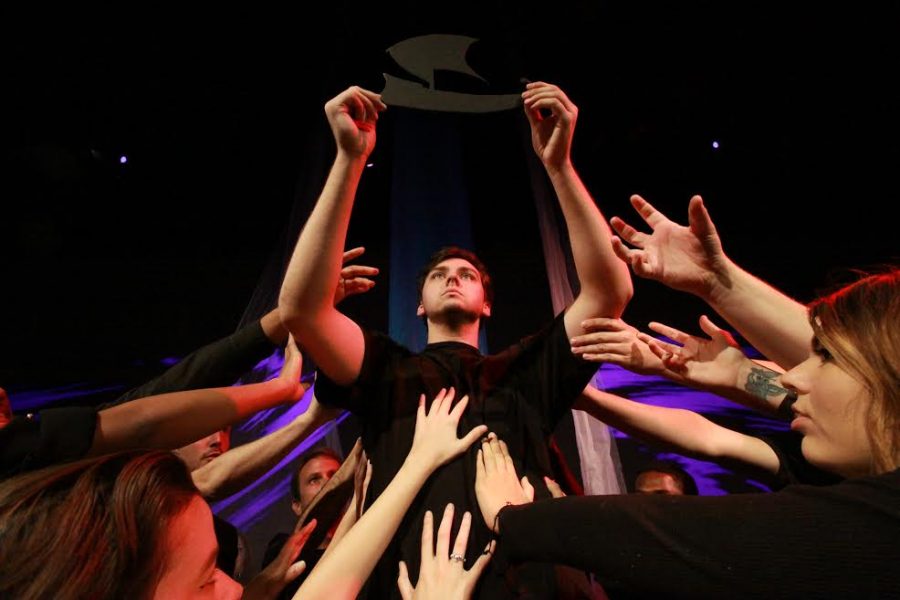 Directors, designers and crew members are working non-stop on the SCC production of Argonautika.

The Oct. 19 opening night is less than three weeks away.

The play, Argonautika, by Mary Zimmerman is written in the third century B.C. time frame, it is about the ancient myth of Jason and the Argonauts. It is a voyage revolving around monsters, gods, nymphs, and adventure in order for Jason to obtain the Golden Fleece.

The design and production team is composed of staff members and students who are currently doing hands-on work in different fields of theatre production.

SCC’s Theatre Producer, Randy Messersmith, along with theatre summer conservatory students, selected the theme after having done research on Greek theatre over the summer.

He hired on the design and production team, setting schedules, along with securing the funds for the play and ensured all design teams had enough budget funds to produce their production pieces.

Working closely alongside the marketing department at SCC Messersmith wanted to ensure the playbill is in hand to acquire design publicity materials and send press releases.

“The producer is very much the man behind the curtain,” Messersmith said.

Guest Director, Christy Montour-Larson held auditions in search for actors who were fun to work with considering the intense six-week process that began on Sep 15.

“We also wanted people that felt comfortable in their bodies,” and “had the ability to take the words on the page and interpret them in a way that creates truthful human behavior,” said Larson

As rehearsals took place, behind the scenes, Production Manager Amanda Embry ensured that all design teams were working in a timely manner to produce safe and functional pieces. Whether it is a daily one on one encounter or weekly production meeting, she must confirm that the design teams have enough help to get the job done.

Once the script is in hand, the design team gets to work.

Set Designer Andy Cahoon has been on an average three-week process preparing rough drafts and scale working drawings for the set of Argonautika. His working process is to read over the play multiple times in order to gain a sense of technical aspects while creating inspiration sketches.

“The biggest challenge is keeping things simple but also keeping them interesting and elegant,” Cahoon said.

Keeping in mind—the actors entrances, exits and mobility, Cahoon finalized the set design after researching the original Argo of the ship from ancient Greek times. The construction time for a set is two to three weeks on average depending on the amount of labor work put in.

A rumor was said to have been circulating that might involve an actor swinging from ropes.

“My role is to safely engineer and build that set under budget so that we can get as close to the scene designer’s vision on stage,” said Technical Director Taylor Neuburger.

After reviewing the set designer’s layout of the set, Neuburger’s first priority was to make a ground plan based around the design in order to ensure that all costs were under budget, check out what’s in stalk, and what materials will need to be purchased.

Working alongside the director and the set designer, her job is to make sure the architectural factors of the set are physically possible, if not, she must collaborate with them in order to successfully capture their visions.

Apart from bringing the set to life, Costume Designer, Abigail Marshall brings life to the characters. After reading the script not once but up to three times and from different perspectives, she was able to visualize an idea of what color scheme, pattern and what each character was going to look like.

Marshall’s overall process took on average one week and a half to read and sketch out costume designs for each character.

Every designer has their own methods and process, “Mine was very chunked out and spatial,” Marshall said.

There are a total of 16 cast members, two of which have only one costume throughout the entire play and the rest having up to three or four costume changes.

There are up to 25 costumes.

Slowly but surely, as the play progresses, lighting and sound designs are being introduced to the play. As light designers, their jobs are to consult with directors and designers to assure that they are visually capturing the mood of the play.

It is their responsibility to create a lighting design, decide when the color scheme change, and when special lighting effects will take place. Both lighting and sound designs give realistic features to the play that catch the audience’s eye.

As Sound Designer and Assistance Composer, Matthew Brown is given the responsibility to do lots of research on the play in order to properly add in the sound effects which are the in’s and out’s of every scene.

As a usual routine, Brown engineers various sounds on his personal computer and then bring them onto the soundboard.

“I make sure to yell out a warning, this is probably going to be loud, and then I blow out the system and then adjust from there,” Brown said.

For the Argonautika production, Brown is taking a difficult new lead and composing original tracks for the entire show. All in all, it is still a work in progress.

Argonautika has various factors behind the scenes. There are still many more crew members such as stage managers, assistant sound/board operators, that are unknown to most of the public.

Weeks, days, and hours are spent in any theatre production play, concert, and film.

Directors, designers, and crew members all take part in the creation process and bringing the play to life.