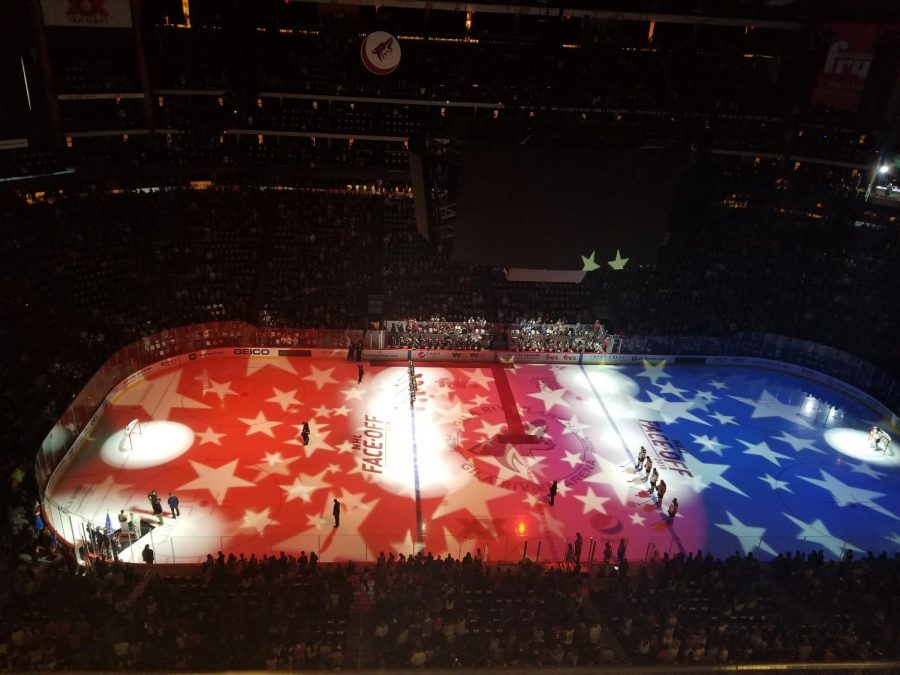 Arizona Coyotes honor Senator John McCain with a moment of silence before the game.

The Coyotes brought flair and flash to their first Kachina Saturday for their home opener with player introductions, Howler repelling from the rafters and the use of the newly installed scoreboard.

They also held a moment of silence for Senator John McCain, who passed away Aug.25. McCain was a long time Arizona Coyotes fan and proponent of the team being in the desert.

However, with several injuries keeping three of their star players out, the Coyotes struggled to find the offense they had last season.

The Coyotes have been scoreless for 120 minutes, two full games after putting 41 shots against Anaheim Ducks goaltender John Gibson this evening and 30 shots against the Dallas Stars goaltender Ben Bishop on Thursday night.

During the first period of play, the Coyotes controlled the game outshooting the Anaheim Ducks 5 to 11.

The third period the Coyotes put more pressure on the Ducks and their goaltender, John Gibson but he would not break with 22 shots on goal to end the third period. The Coyotes, in the last two minutes of the game, found themselves on the power play then with one minute left they had a two-man advantage and still could not convert.

The Coyotes have been scoreless for 120 minutes, two full games after putting 41 shots against Gibson this evening and 30 shots against the Dallas Stars goaltender Ben Bishop on Thursday.

“We’ve all been through our slumps. You keep fighting. You keep pushing. We had 40 plus shots. We had a lot of opportunities.” Head Coach Rick Tocchet said when asked about the team not scoring. “It’s a hard league to score in. We left some opportunities to shoot the puck out there.”

“I thought we played a really good game over 60 minutes. We talked about working hard and that’s what we did tonight” Team Captain, Oliver Ekman-Larsson, said after the game. “I think it’s important that we realize that that’s the way we have to play if we’re going to win hockey games.”

“It’s only two games into the season. We’ve got to chill out here.” Tocchet said when asked about the back-to-back shutouts. “We played two pretty good games and we can’t score right now. It is what it is.”