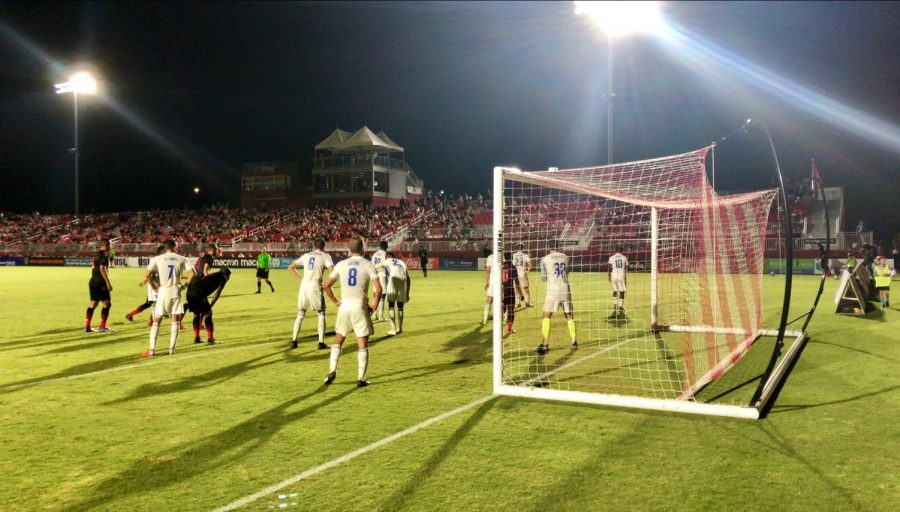 Phoenix Rising FC took the field Saturday night in hopes of keeping control of their own destiny for the top spot in the western conference, as the first round of the playoffs is only two weeks away.

A win would also guarantee a top-two finish that would result in a second ever home playoff match should the team advance to the second round.

Unfortunately for the Rising, playoff bound Reno 1868 FC was able to come away from the 0-0 match with a point, solidifying their spot in the western conference standings.

“There are no easy games in this league,” said Rising defender, Joseph Farrell. “Every game is a challenge. We have two games to gear up for playoffs. That’s our main goal: to win a championship in November. We’re going to use these last two games as tune-ups and hopefully, we hit the ground flying come the first round of the playoffs.”

The Rising sit just three points behind Orange County but have two games left to play, while Orange County has only one match remaining.

The reason why the Rising no longer has control of their own destiny is should they finish tied with Orange County at 69 points, the first two tiebreakers are total wins and goal differential.

The two teams would be tied on total wins (20) and Orange County SC’s goal differential (+32) is three better than the Rising’s (+29).

Therefore, there are two ways Phoenix can be crowned regular season western conference champions. The simplest way is for the Rising to finish with more points than Orange County.

“It’s tougher for us now,” said Rising goalkeeper, Carl Woszczynski. “We need a little help. I thought we played a good game. We’re doing well. I think things are clicking at the right time even though we didn’t score today. I think we’re going to finish strong and go into the playoffs strong.”

Phoenix Rising FC lacked any clinical finishing prowess in front of the net, as they failed to convert on any of their goal scoring opportunities.

“We created a ton of chances,” said Rising manager, Rick Schantz.  “We weren’t as clean in the final third as we could have been. We had two breakaways in the first half. We had a couple really good opportunities. Their keeper was spectacular. He did a really good job. I think we’re losing a little bit of our focus in the final third. At this time of the year, that needs to get fixed real quick.”

The first was in the 28th minute when Rising defender Joseph Farrell played a through-ball that was dummied by captain and player-owner Didier Drogba. It fell into the stride of forward Jason Johnson who wasn’t able to finish the one-on-one opportunity as OCSC goalkeeper and Arizona native Matt Bersano was able to make the save.

Seven minutes later, Drogba played a through-ball that led Johnson in on goal, but the forward was unable to capitalize again, as his right-footed toke-poke attempt went wide of frame.

Reno’s first of only two shots on target was in the 50th minute when forward Mohamed Thiaw crossed the ball to teammate Jerry Van Ewijk.

That play resulted in a heroic near post save from point blank by Phoenix goalkeeper, Carl Woszczynski.

Reno’s final attempt of the match came 15 minutes later, as Van Ewijk created space for himself with a few stepovers and hit a right-footed curler from the corner of the box, but Woszczynski was up for the task, as he made the save to keep the score-line level at 0-0.

Rising vice-captain Soloman Asante continued to create havoc along the right side of the Rising attack. In the 76th minute, he found himself with a shot opportunity from the right corner of the box, but Bersano had his near post covered, as he pushed the Asante shot aside for a corner kick.

Phoenix’s final opportunity of the game was perhaps their best, as midfielder Devin Vega, played a ground cross for fellow substitute, Billy Forbes, but the right-footed attempt was stopped and held onto by Bersano, as Drogba was awaiting the potential rebound and tap-in goal.

After 95 minutes of play, the referee called for the final whistle, bringing the game to an end as a 0-0 stalemate.

Phoenix Rising FC will try to keep the pressure on Orange County SC for the top spot in the western conference, as the Rising will travel to Las Vegas to take on the Lights on Wednesday, Oct. 10, with an 8:00 p.m. kickoff time.