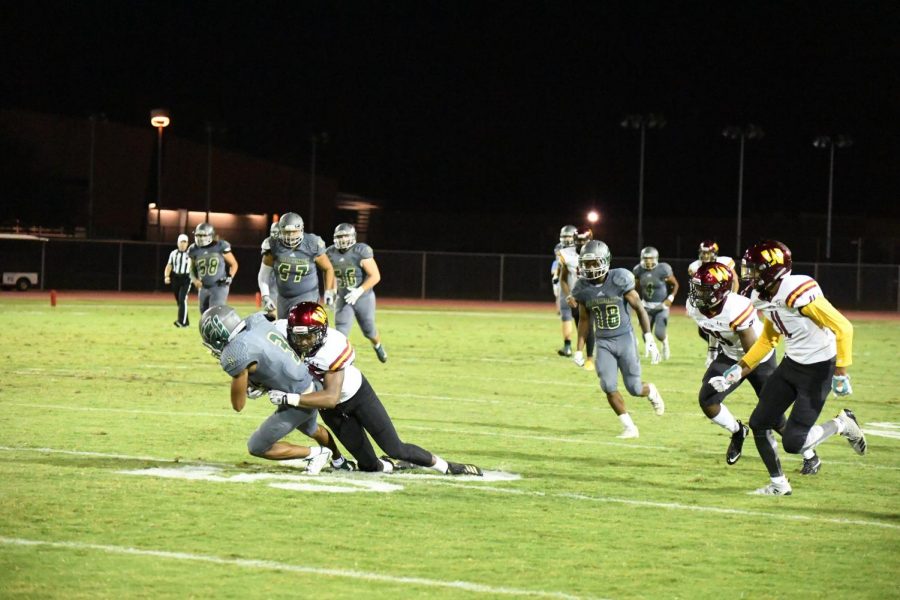 Scottsdale may have won the coin toss, which they chose to defer until the second half, but Arizona Western College set the tone for Saturday night’s game on the first drive with a 95-yard kick-off return touchdown.

“We were the team that when we wanted to get going we seemed to do a pretty good job of it but then we just let little mistakes and things cripple us,” Madoski said.

“We need to bring a level of consistency to our play, we need to be able to do it for 60 minutes… we just need to settle in and go play and be who we are and be the best versions of ourselves.”

The Artichokes tried to redeem the tough 23-9 loss on the road against Pima Community College that ended their undefeated status.

Scottsdale defensive back, Tavion Allen gained 68-yards on a kick-off return putting the Artichokes in Matador territory at their own 30-yd line to start the first quarter.

On third down with two yards to go, quarterback Kare Lyles found wide receiver Devin Neal open in the end zone for a 22-yd pass touchdown.

Followed up by kicker Alfredo Marquez with the extra point putting the Artichokes on the board for 7-7 score.

The Matadors delivered a high snap to their QB which the Artichoke defense took full advantage of resulting in a turnover, defensive back Aaron Turrey was able to recovery at the 45-yard line.

Just as Scottsdale was gaining momentum—a third and goal penalty flag was thrown for a personal foul on the offense due to a chop block sending the Artichokes back 15 yards.

The penalty forced Marquez to kick a 30-yd field goal that gave the Artichokes their first lead of the night of 10-7 to end the first quarter.

Scottsdale came out second quarter unable to score and with the additional missed kick from Marquez due to a tip-off no points were gained on the initial possession.

Western managed two touchdowns and one extra point ending the first half with a 28-13 lead over Scottsdale.

At the start of third quarter play the Matadors picked off the ball from Scottsdale wide receiver Amonte Phillips for a touchback on Western’s own 20-yard line.

Later in the quarter, an Artichoke interception made by defensive back, Adarian Beamon on Scottsdale’s own two-yard line provided the much needed turnaround momentum.

A safety was called and Western’s defense was able to hold running back Alec Wyble-Meza from getting out of the end-zone, giving the Matadors a 30-13 advantage.

The game ended with a Western College victory of 37-19 and an Artichoke 4-2 record.

“We’re not as great as 4-0, but we’re also not as bad as 4-6, we got to figure out what the reality really is and it’s going to sit somewhere in between,” Madoski said.

Scottsdale is 1-2 in their conference.