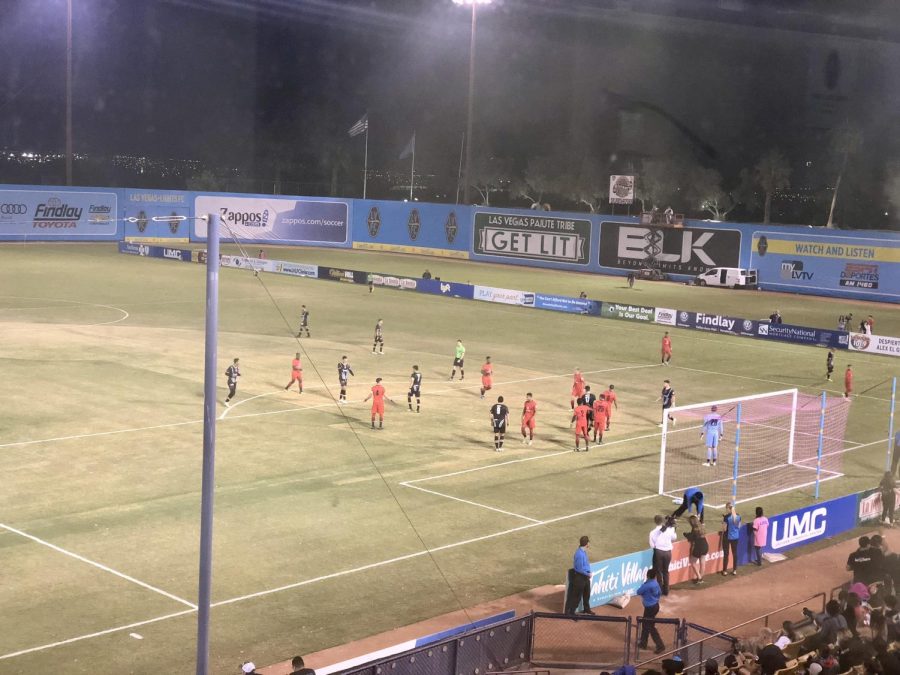 Phoenix Rising FC made the four-hour trip to Las Vegas to take on the Lights Wednesday night, as they looked to keep the pressure on Orange County for the top spot in the western conference standings, while a win would clinch a top-two finish.

Phoenix manager, Rick Schantz, elected to play mostly bench and reserve players in order to rest most of the team’s regular starters in preparation for the playoffs that start on Oct. 19.

The Rising hit the ground running in the opening minutes resulted in multiple chances. However, the second half would prove deadly Las Vegas scored four goals in the last 20 minutes of the match to stun the Rising 5-2.

In the very first minute of the game Rising forward and captain, Chris Cortez flicked on a throw-in down line to Shaft Brewer Jr. Brewer played a ground cross for Billy Forbes but shot attempt wasn’t enough to beat Lights goalkeeper Thomas Olsen.

Following a miss-clearance by Olsen one minute later Phoenix midfielder Devin Vega, played a square ball to teammate Collin Fernandez. Fernandez’s left-footed attempt along the ground went passed the diving hand of Olsen and into the back of the net to give the Rising a 1-0 lead early in the match.

In the 10th minute Las Vegas forward Omar Salgado put Matt Thomas in on goal with a through-ball. Rising goalkeeper Zach Lubin was able to make the stop, as his one-on-one save kept his team’s lead at 1-0.

Following another Lights turnover in their own end, Forbes attempted to play a square ball across the box for Brewer for an easy tap-in goal. Brewer as not able to guide the ball into the back of the net.

Fifteen minutes into the match Phoenix forward Kevaughn Frater came on for Cortez when Cortez was forced to leave the match with a hamstring injury.

“I felt my hamstring a little bit,” said Cortez after the game. “It’s still to be determined. I’ll see what happens, talk with the medical staff and go from there.”

Two minutes before the halftime whistle Vega scored a penalty of his own sending Olsen the wrong way to give the Rising a 2-1 halftime lead.

“To be honest, we just weren’t good enough all around,” said Cortez.

“We didn’t close spaces enough. We didn’t make our crosses. We allowed them back into a game that we go up 1-0 in the first few minutes of the game. It’s an ideal start,” Cortez continued. “We should’ve capitalized on that. We gave up a penalty—that happens—then we get one back to take the lead and should take care of business, but we just didn’t. We didn’t finish enough chances. When you don’t finish your chances, you allow a team to stay in a 2-1 game. We got punished for it.”

In the 64th minute Rising defender Doueugui Mala played a longball for Brewer, but the Phoenix forward was not able to score, as Olsen made a near post save and keeping his team’s deficit at only one goal.

It was all Las Vegas after that, as the home team drew level once more when forward, Sammy Ochoa’s pass across the face of goal resulted in an easy tap-in by defender Miguel Angel Garduño in the 71st minute of the match.

The Lights took the lead three minutes later when midfielder Daigo Kobayashi’s shot from point blank was saved by Lubin, but fell to the feet of midfielder Raul Mendiola who put the open net opportunity in the back of the net to give the Lights a 3-2 lead.

Five minutes later Vegas midfielder Carlos Alvarez played a one-two with Mendiola in the box that resulted in a goal that gave the Lights a commanding 4-2 lead.

Las Vegas put the nail in the coffin when midfielder, Alex Mendoza, played yet another cross in the box that resulted in a stunning scissor-kick goal by Ochoa in the 84th minute of the game.

The loss results in the Rising, barring a miracle, losing out on a western conference championship, but a win in their next game would still clinch the number two seed in the playoffs.

“We want to win,” said Cortez. “We want to get the highest (seed) we can. That’s was the point: win these last three games and we haven’t done that so far, so we need to at least win one of them before going into the playoffs.”

“We need to get the highest seed possible, try to get as many home games as possible to try to take advantage of as we can come playoff time. That’s our goal,” he continued.” We have a quick turnaround from here to Saturday and we have to focus on what’s next: getting ready for Portland, finish the season off right and go into the playoffs the right way.”