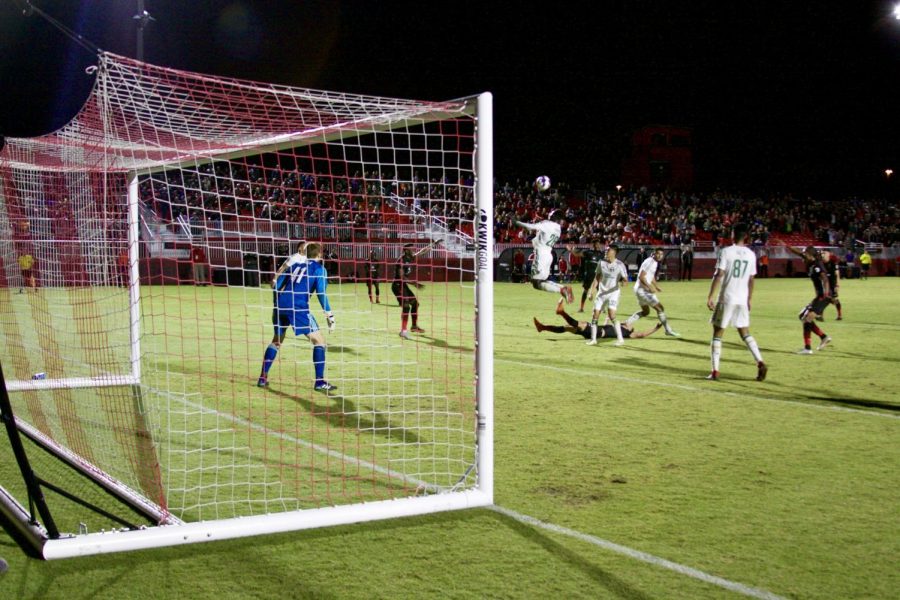 Portland Timbers 2 center back, Mou Jadama, clears away a cross

The team looked to finish the season strong heading into the playoffs but the Rising fell victim to a 1-0 loss to Portland.

“We have to come out with a stronger focus and play the full 90 and when we have our chances, we take them,” said Rising defender Joseph Farrell.

Three minutes into the game Rising forward Jason Johnson played a chip cross over the charging Timbers 2 goalkeeper Alex Mangels for Kevaughn Frater. Whose header resulted in the ball striking the post.

Phoenix had a disallowed goal in the 56th minute of the game when a Johnson ground cross across the face of goal was met by the hand of Mangels, but the ball fell directly to Frater, who was able to bury the easy tap-in.

Frater was called offside, restoring the game to a 0-0 score line.

However, upon viewing the replay, it was clear and evident that Frater was in fact onside.

There is no video assistant referee in the United Soccer League.

Four minutes later Johnson played another ground cross across the face of goal to Asante, who looked to surely score.

Mangels scrambled to get back in position to defend the shot, but Portland defender Marco Farfan’s challenge was able to deflect Asante’s shot wide for a corner.

In the 70th minute Rising midfielder, Devin Vega played a cross in from the right side of the box for Frater inside the six, but the forward sent the ball over the crossbar.

“We had our chances, we just didn’t finish them,” said Farrell.

Timbers 2 made the most of their only dangerous attack of the game when defender Jack Barmby whipped in a cross from the left side of the box that forward Augustine Williams was able to head into the back of the net to give Portland a late 1-0 lead with the game’s only goal in the 85th minute of the match.

“It’s getting difficult to play against 12 players all the time,” said Rising manager Rick Schantz. “I’m sick and tired of the inconsistencies of the referees.”

The loss results in Phoenix Rising FC falling to the third seed of the western conference playoff standings.

The six seed and the Rising’s first-round playoff opponent is Portland Timbers 2.