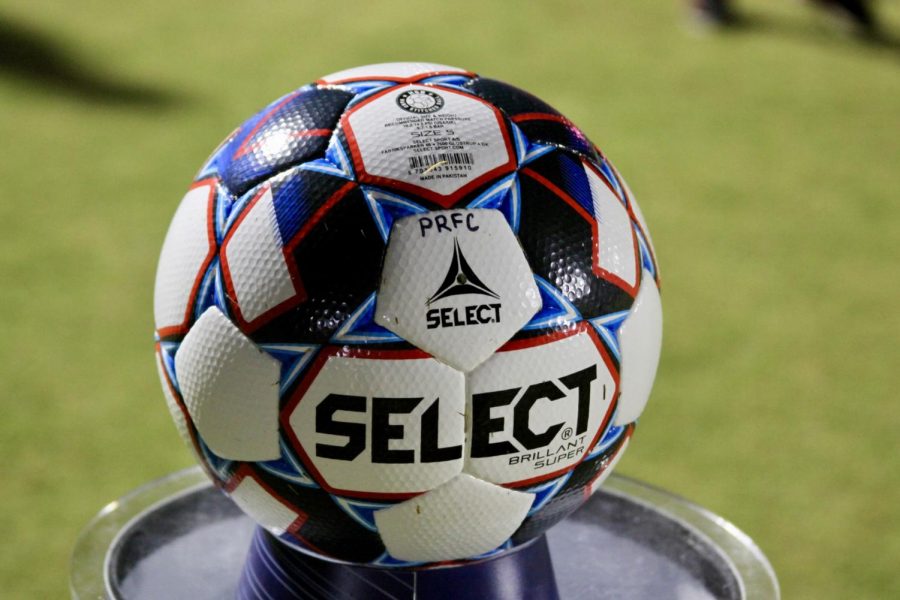 Soccer ball waiting for the game to start.

Phoenix Rising FC hosted Portland Timbers 2 Friday, Oct. 19 in front of the largest crowd in franchise history of 7,511 in what was the team’s first ever home playoff game.

“The crowd was incredible,” said Rising goalkeeper Carl Woszczynski. “It’s the loudest I’ve ever heard this stadium ever.”

With stakes at an all-time high, the Rising was able to put together a 3-0 win Friday night for the first playoff win in franchise history.

“I told the players to die on the field tonight,” said Rising manager Rick Schantz. “Everybody gave 100 percent. Everybody was committed to the cause. We had guys out there that really weren’t fit, but it’s playoffs.”

“It feels great that we can come to practice Monday for another week,” said Rising forward Jason Johnson. “It was a great improvement from last week.”

Contrary to the Rising’s normal attacking style of play in the previous match between the two sides, Schantz elected to come out of the changing room with a more defensive, sit back and absorb pressure mindset.

This resulted in a rather dull first half, as Timbers 2 didn’t change from their similar playing style that proved victorious in Phoenix only six days ago.

“Last week, Portland did a really good job of getting a block behind the ball,” said Schantz. “We got frustrated and were trying to get really difficult scoring opportunities, so the plan tonight was for us to try sit back a little bit and try and open space behind them.”

Only two goal-scoring chances were created in the first half, both by the Rising.

The better of the two came in the 28th minute, as Rising captain and player-owner Didier Drogba knuckled a 35-yard free kick that proved too much for Portland goalkeeper Austin Pack, as his mis-punch directed the ball into the back of the net to give Phoenix a 1-0 lead.

In the 62nd minute, Rising forward Chris Cortez launched a long ball upfield for Jason Johnson, who used his speed to take advantage of Pack’s hesitation to come out of his box to clear the ball.

He outmuscled Timbers 2 defender Nathan Smith to retain possession, which resulted in a left-footed shot that beat Pack at his near post to give Phoenix a commanding 2-0 lead.

Seven minutes later, Rising midfielder Kevaughn Lambert almost put the game to bed when his shot just outside the top of the box took a deflection on its way toward goal, but an off-balance Pack was able to get his toe to the ball to keep his team’s deficit at 2-0.

Schantz took Drogba off the pitch for a standing ovation in the 77th minute of the game.

Because Drogba is retiring at the conclusion of the season, this is potentially the last time he will ever play in front of his home crowd depending upon the results of their next opponent’s game.

“I brought him out at the end to save his legs a little bit and I told him that the young boys would seal the deal for him,” said Schantz.

In the final minute of the game vice-captain, Soloman Asante found himself just to the side of the penalty spot with the ball at his feet, which resulted in a chip over a rushing Pack to bring the game to its final score line of 3-0.

The win advances Phoenix Rising FC to the western conference semifinals against either Sacramento Republic or Swope Park Rangers, but the location of the game is dependent upon the victor.

“I’d like to see Swope because I’d like to play in front of these fans again. I heard there was well over 7,000 tonight and the crowd was unbelievable.”