Arizona Coyotes get first home win of the season 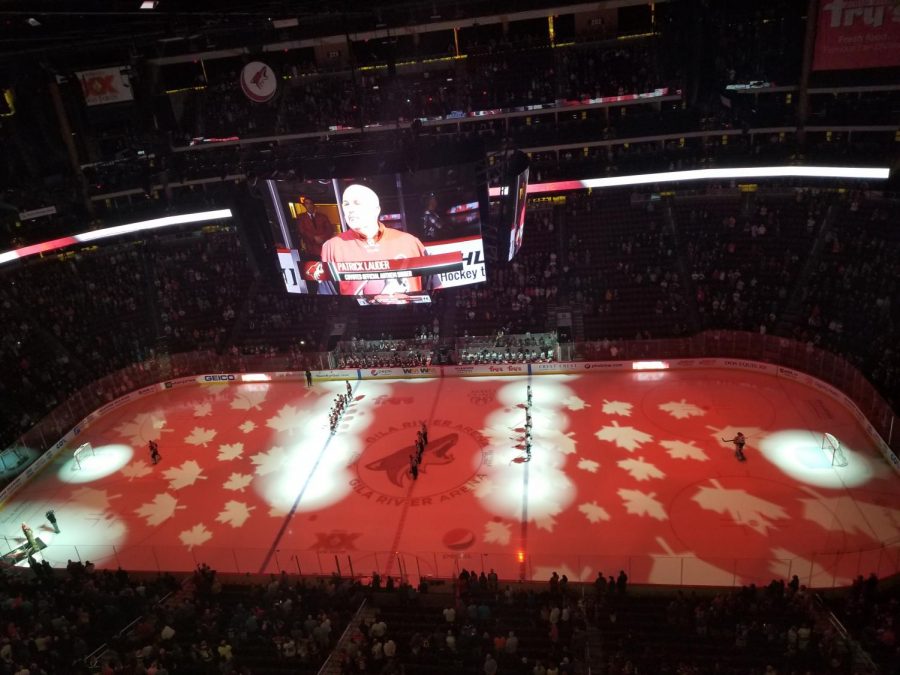 The Coyotes and Canucks wait for the Canadian National Anthem to be sung by official anthem singer Patrick Lauder.

The Arizona Coyotes started the evening 3-5-0 with their three wins and all their goals scored on the road. Tonight, they were able to finally score and bring home a win for their home crowd.

The first period was back and forth, each team trading chances and rushes. Canucks Goaltender Anders Nilsson was able to make the saves that were needed. With 5:34 to go in the period Coyotes Goaltender Darcy Kuemper made a save that kept the score 0-0 and the team engaged going into the second period.

At the start of the second period, the Coyotes were buzzing.

43 seconds in Defenseman Alex Goligoski walked the puck from the blue lines and down through the slot and with a backhand sent into the net between Nilsson’s pad and elbow.

The Canucks come right back with a goal from Darren Archibald, assists to Troy Stecher and Adam Gaudette, right off the face-off, past Kuemper who was cheating too far to the right, leaving Archibald a mostly open net.

The rest of the period was more back and forth with the Coyotes and Canucks until 9:18 into the period when Canuck Antoine Roussel and Coyote Lawson Crouse got into a scuffle and took coincidental minors for roughing.

At 14:13 Roussel grabbed the back of Coyotes forward Clayton Keller’s jersey and pulled him to the ice.

Lawson Crouse and Oliver Ekman-Larsson to an exception to this. Roussel and Crouse both left the ice with 10-minute misconducts and Roussel with the extra two minutes for roughing.

You mess with Keller, you’re hearing from the captain and the sheriff. pic.twitter.com/aTSWi0A40n

In the third period the Coyotes, on a poke check from Alex Galchenyuk, Keller was able to take the puck and score, at 3:55, to make the score 2-1 Coyotes.

Brad Richardson was able to corral a mishandled puck and score shorthanded at 12:16, assist going to Kevin Connauton, 3-1.

Lawson Crouse was able to seal the game with an unassisted goal at 18:00 making the score 4-1.

“There was urgency, Vancouver is leading the division. They’re 6-4, we’re 3-5. We have a chance to get close to .500 and we have a five-game homestand,” When Head Coach Rick Tocchet was asked about tonight’s game being a must win. “Vancouver worked hard. I thought we were getting frustrated. (In the) third period the players dug in, which I’m proud of.”