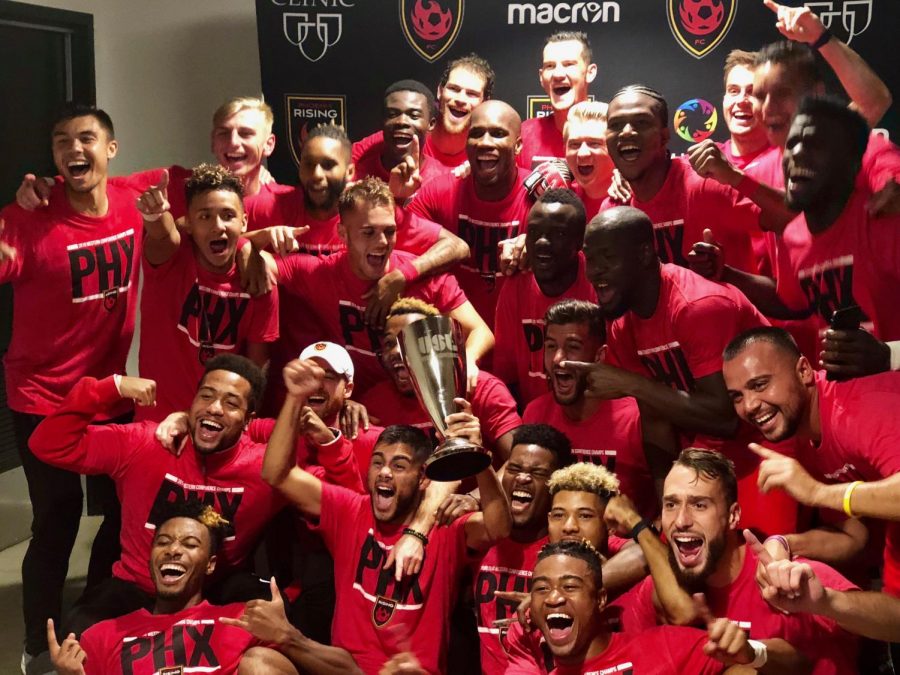 The entire PRFC team posing with the trophy

The No. 3 seed Phoenix Rising FC defeated the No. 1 seed Orange County SC 2-1 Saturday, Nov. 3 in the Western Conference final in Irvine, California.

Rising fans that made their way to the Western Conference finals were heard throughout the Irvine stadium, as two sections were sold out for Phoenix Rising fans that had made the trip via buses that shuttled them from the Valley.

“Credit to most importantly, the fans,” said Rising manager Rick Schantz. “When we’re defending and working as hard as we can on the road like that and we have 1,000 people screaming, yelling and chanting, the guys will never quit.”

“It was incredible having probably more than 75 percent of the stadium in red cheering for us,” said Rising goalkeeper Carl Woszczynski. “It was a great environment. It felt like a home game… Our fans kept us going and got us through the end of the game, so it’s incredible. Thanks to all of them.”

The match began with a Rising advantage when midfielder Kevin Lambert played a through ball for forward Chris Cortez resulting in a left-footed missile strike in the top right corner to give PRFC a 1-0 lead in the second minute of the game.

Not only was the opening goal of the match the first allowed by Orange County SC this postseason, but it was also the fastest goal in USL playoff history.

The rest of the half was lackluster in comparison as both teams were only able to muster one shot on goal apiece.

The only other goal scoring chance came in the 36th minute, as Rising vice-captain and forward Soloman Asante whipped in a cross for Cortez, who was able to get on the end of it, but his diving header went just wide, keeping the Rising’s halftime lead at 1-0.

In the 62nd minute, all-time Rising goal-scorer Cortez was forced to come off with a lower body injury, causing midfielder GladsonAwakoto substitute.

“Chris Cortez came out for his hamstring tonight and I know he’s got a scan first thing in the morning, if not here, as soon as we get back to Phoenix and we’ll make the decision (if he’ll play in the USL Cup Final) then,” Schantz said.

In the 65th minute, following an OC turnover in their own end, Asante had a shot from just outside the top of the box, but the attempt went wide, keeping the score-line at 1-0.

A minute later, OCSC defender Joe Amico had a shot of his own after a few stepovers gave him enough space for a shot just outside the corner of the box, but he was unable to bring his team level, as his attempt too went wide.

In the 73rd minute, Rising captain and player-owner Didier Drogba put Phoenix up 2-0, as he put the ball through OC goalkeeper Andre Rawls’ legs and into the back of the net.

In the 80th minute, Awako missed an opportunity to put the game to away, as his header from a Soloman cross went wide.

Two minutes later, OCSC cut the lead in half, as midfielder Koji Hashimoto got on the end of a far post cross and poked it into the back of the net.

In the waning seconds of the game, OCSC whipped in a cross off a set piece that was directed on net, but Woszczynski was able to make the save that crowned Phoenix Rising FC champions of the Western Conference.

“My defense has been incredible in front of me,” Woszczynski said.  “I had to come up with that one.”

PRFC will now travel to Louisville to take on Louisville City FC in the USL Cup Final.

“We said this isn’t the final, this is the semi-final. It’s great to get a cup and win that, but the job’s not done,” Woszczynski said.

However, due to the poor quality of Lou City’s pitch, the game will be played at Lynn Stadium, home of the University of Louisville Men’s and Women’s Soccer teams, on Thursday, Nov. 8 at 6:00 p.m. on ESPN2.

“We’re going to play at University of Louisville, which is world-class,” Schantz said.  “I have lot of players that have played for me that have gone there and I know that it’s going to be an outstanding pitch and great facility.”