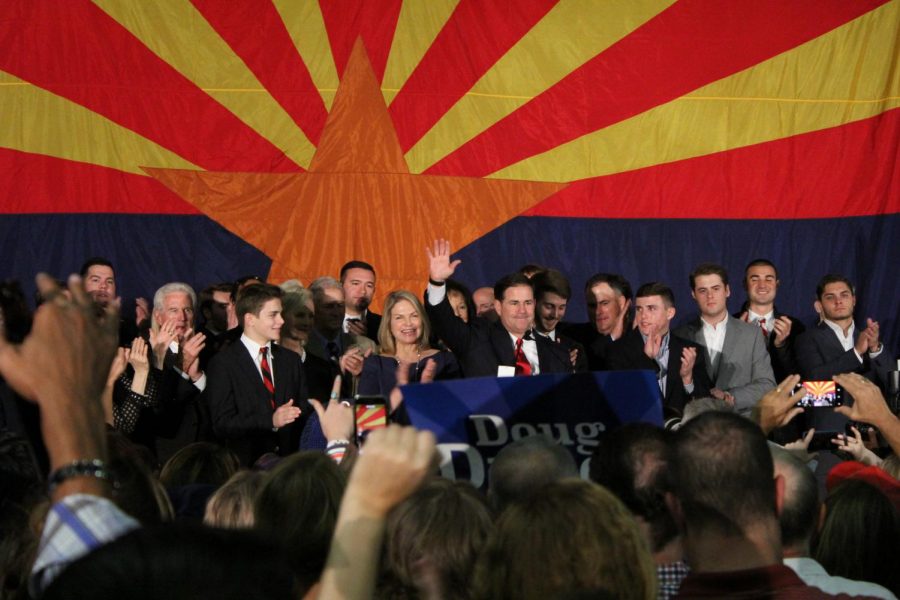 It was a high energy atmosphere Tuesday night at the Doubletree Hilton, in Scottsdale. The Republican Election watch party was visited by a variety of people including Attorney General Mark Brnovich, and Governor Doug Ducey. The anticipation of votes being counted was in the air.

Kristan Sinema and Martha McSally had a very close race at 8:18 pm with 48.5% for Sinema against McSally’s 49%.

Republicans won some major races including the re-election of Brnovich and Ducey as well as retaining control of the  U.S. Senate.

Governor Doug Ducey spoke at the Arizona GOP election watch party, after winning re-election Tuesday night. He took the stage along with family members and Arizona Republican dignitaries including Cindy McCain to a rousing ovation.

Ducey thanked his opposition and commented on the spirited debate that was part of this campaign.  He also thanked his family and campaign workers and recalled his humble beginnings of arriving 36 years ago in a “beat up, old, Datsun”.

“Four years ago, our economy was stagnant, our state budget was broken and our public school system was mired in lawsuits.  Today, our economy is booming.  We have more jobs available than we have people to fill them,” Ducey said.  “We are thrilled that our teachers are finally getting the raise they deserve.”

“If you voted for me, thank you.  If you didn’t, I want you to know – I work for you, Ducey said.  “We are all Arizonans, we are all Americans.”

Northeast Valley News spoke to several event goers about their political concerns during this mid-term election.  Education was key in some voters minds while others were most concerned about border security as they cast their ballots Tuesday.

The live stream on New York Times reported the Democrats won 207 House seats against the Republicans 189. This means the DFL gained 24 seats.

The Republicans claimed the Senate. Winning 51 seats while Democrats held on to 43.

CBS political commentators predict a balance of power resulting from a Republican controlled  Senate and a DFL controlled House.