The 2:15 Ep-16 The Inside Scoop and Deepish Thoughts 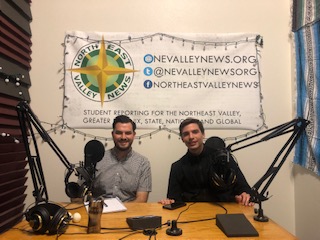 Jorge Galicia and reporter Carlos Alfaro in the podcast room

In this episode of “The 2:15”, The Inside Scoop with Carlos Alfaro features an interview, recorded in Spanish, with Jorge Galicia, a Venezuelan attorney, recently returned to the U.S., about the national crisis occurring in Venezuela.A brand new segment called Deepish Thoughts debuts during the second half of the show. Cindy OVOXO, Damonie Earl, Ivana Iguana, Jake Anderson and Ole Olafson all squish into “The Closet” to find their inner customer service voices.

You can find the English translation below.

Disclaimer. The translation is the first 3 minutes of the interview to give our audience a summary of what happened in Venezuela.

I- Thank you for joining us. Tell us a little about yourself. What brings you here to the United States?

J-In this moment I’m part of an organization that focuses on the making of policy called Project Arizona. Its a program that will last for three months and  it will serve to broaden our understanding with us the students of political philosophy, economic liberties, all that has to do with the study of economic liberalism and classical liberalism of political philosophy -All of this is because- since 2014- I have been a part of the political opposition of Venezuela – I’m affiliated with the political party called “Vente Venezuela”- and I’ve promoted these values basically for 5 or 6 years, so that is why I’m here to continue and gain more knowledge and return to help my country for when I return.

C- Wow- what I want to know about you, Jorge, here in the news we see the story of Venezuela from afar, we know the story that the media provides for us, and sometimes it’s superficial. Wanted to know if you could briefly explain to us for people that do not know the problem, what is happening in your country?

J- Well, if we want to summarize the problem in Venezuela, we can summarize it in one word, dictatorship. It’s a dictatorship what we are living in Venezuela. To put it into context to see where it came from, the international actions that we see on Venezuela what derived was that we have the 2018 presidential elections that were simply a scam, a government fraud where there were was no real opponent in the elections. There was no electoral participation from the people because the people knew beforehand there was fraud and knew it didn’t matter if they voted or not because they knew the result would be the re-election would be a victory to the dictator. Well none of the important members of the international community, say the United States, recognized this election so this took us into 2019 where Nicolas Maduro swears into office back into the presidency. It is not recognized again from the same ones who didn’t recognize the presidential election. This creates a constitutional usurpation of power because Maduro flaunts the military power in Venezuela but isn’t legitimately to do so, the president of the National Assembly that is the only institution that is elected democratically that is left in Venezuela and is controlled by the opposition, that president whose name is Juan Guido decides to swear himself in as president, what demands the constitution in this case because now there is a void of power because there is nobody to assume the power legit melty. An article in the Constitution exists to allow him [Guido] in this case, assume the presidency of the republic and this is why nations around the globe in the western region have decided to recognize Guido as president.