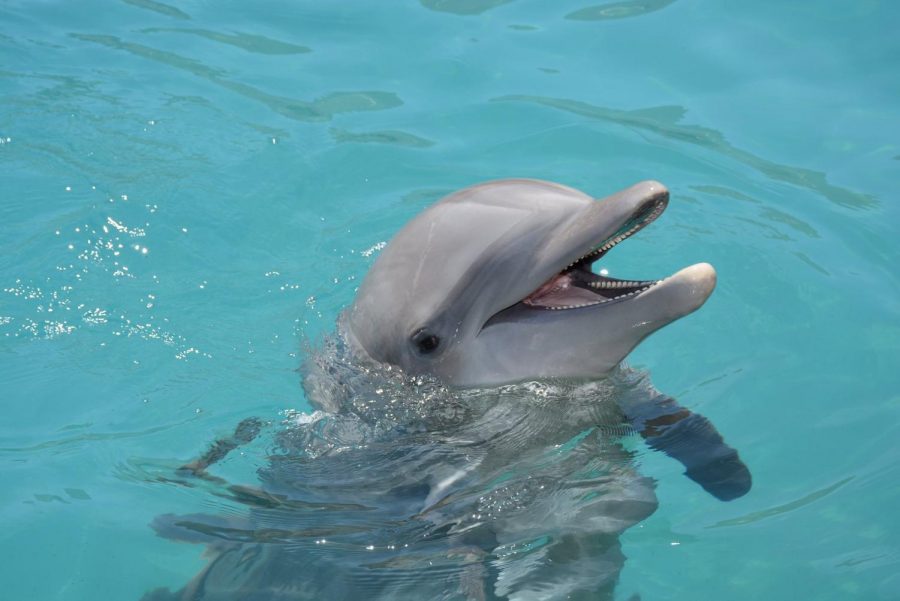 “Khole” one of the four dolphins that died at Dolphinaris Arizona.

The Scottsdale “Dolphinaris” attraction located off the 101 freeway opened in October of 2016.

It was billed as a family-friendly attraction where the public could participate in swimming interaction encounters with dolphins housed on site.

It was part of a complex which also houses “OdySea,” a separate attraction that features thousands of sea creatures for viewing including sharks, penguins, and octopus, as well as the Butterfly Wonderland, that houses thousands of different types of butterflies.

Even before the grand opening of Dolphinaris, protesters began holding regular protests along nearby roadways in hopes of garnering media attention to appeal to the public to avoid Dolphinaris and keep the attraction from opening.

Individuals from the early protests that were familiar with dolphin aquarium issues in other states alleged that the desert setting would make those problems much worse here, including exposure to dust and fungal spores.

The facility opened amid the objections.

Dolphinaris claimed it was from a rare muscle disease, but reportedly did not disclose the death to the public until one month later.

It wasn’t until two more dolphins died, Khloe, age 11 in Dec. 2018 and the latest, Kai, 22 years old, that the facility, now facing public outcry, sent their remaining four dolphins to another sea pen at the Coral World Ocean Park located in the U.S. Virgin Islands.

Initially, it was reported that Dolphinaris, while conducting an investigation into the deaths, would reopen at some point.

Nevalleynews.org contacted the leaders of two protest groups, one located in Arizona and the other in Washington D.C.

Danielle Riley, Chairman of PleaForTheSea, a local group says that dolphins can live long lives, a fact that makes the deaths of all four dolphins troubling.

“Dolphins live to be 40 to 60 years old in their natural environment, much longer than in captivity, and many of them are acquired from Taiji, Japan in dolphin captures such as depicted in the movie, The Cove,” Riley said.

Riley alleges, that like SeaWorld, Dolphinaris would employ tactics such as starving the dolphins before a show and teach them to perform tricks for food.

She says her group wants to educate the public on issues affecting not only dolphins but other types of sea mammals.

“The dolphins are used to a wide open ocean and their quality of life is low in the small enclosures of Dolphinaris,” Riley said.

“The public doesn’t realize the hazards of swimming with dolphins as they can pass skin and bacterial infections between each other.”

We asked Riley about the transportation of the dolphins to the desert.

“The dolphins are medicated and heavily so, and then shipped through FedEx at Sky Harbor Airport for the long flight,” Riley said.

“Dolphins are very intelligent with larger neurotransmitters than humans and that many experience psychoses in captivity. One interesting fact most people don’t know is that dolphins from different parts of the world speak different languages, making life even harder when tank mates are from different regions,” Riley said.

According to a report co-produced by the Animal Welfare Institute (AWI) and World Animal Protection (WAP) scientific evidence and ethical arguments contend that it is unacceptable to confine marine mammals for public display and entertainment.

“Almost all marine mammal species are wide-ranging predators and the best we can provide for them are barren concrete boxes or small sea pen corrals,” Rose said.

The report also describes certain “hot-spots” of live captures around the world, the extensive concerns over mammal captivity, as well as extended

research of mortality rates and  captivity provides nothing beneficial to the animal.

“We are still not certain what caused the deaths of these four dolphins at Dolphinaris within an 18-month period,” Rose said.

She has serious concerns for the four remaining dolphins that have been transferred citing the poor water circulation and poor water quality at the St. Thomas facility.

“These four dolphins must live in this polluted water, all day, every day,” Rose said.

“AWI believes all dolphins can be retired to seaside sanctuaries, but such a sanctuary would never be located in a polluted bay,” Rose said.

She also claims that exhibitions of these marine animals are anything but natural.

“It’s all ridiculously theatrical and glitzy and meant to wow you. It’s not meant to educate you” Rose said.

As bad as the conditions are at the St. Thomas facility, Rose believes it is an improvement from Dolphinaris of Scottsdale.

Shortly after the death of Kai, the AWI organization found out that Dolphinaris was waiting on a report from an outside panel of experts regarding the dolphinarium before making a final decision on the possible permanent closure of Dolphinaris.

Dolphinaris issued a statement on their website reporting their “devastation” over the death of “Kai,” the fourth dolphin to die at the facility.

Dolphin Quest, the group responsible for loaning the dolphins to Dolphinaris was reportedly launching their own investigation—at the time, the autopsy was yet to be finalized.

Reportedly, since the death of Kai, Dolphin Quest terminated its animal loan agreement with Dolphinaris, and the remaining four dolphins were transferred to the Coral World Ocean Park.

On a Coral World Ocean Park Facebook page, a post indicates, “Our four new family members arrived safely and are enjoying learning about their new home. We will give the dolphins time to build strong relationships with their trainers before they are introduced to the public”.

The Dolphinaris sign that was once prominently displayed at the Dolphinaris attraction site that could be seen from the 101 freeway traffic is no longer up and was replaced with a “Beach Club Docktails” banner.

After repeated phone calls and email requests, nevalleynews.org went to the Dolphinaris facility to speak with representatives or management of OdySea about the death of the fourth dolphin and for information on any plans for reopening the Dolphinaris attraction.

We were told that OdySea had no association with Dolphinaris other than being their landlord and that there was no longer anyone on site or available to address our questions.

Nick Stewart, the Global Head of the Campaign on Captive Wildlife tourism at World Animal Protection has made an information tour public and is hoping that more and more people will understand the harm these attractions cause marine mammals.

“Tourists and the global travel industry provide demand for existing and new captive marine mammal facilities, which is why we have chosen to launch the report at one of the world’s biggest travel shows. The arguments and evidence of suffering are here in plain language for travel companies to see,” Stewart said.

In 2016, at the Dolphinaris grand opening, several Dolphinaris spokespersons agreed to an video-taped interview with nevalleynews.org. We questioned both protestors and the Dolphinaris management representatives that claimed the dolphins were safe as well as protestor claims of cruelty to dolphins that are held in captivity within attractions such as Dolphinaris.

Dr. Grey Stafford who previously worked for Sea World of Ohio, and was involved with the Dolphinaris attraction project initially addressed the concerns of the protestors at the 2016 grand opening.

“The reason why people care about these dolphins is precisely because we’ve had zoos and aquariums featuring them and because congress has reaffirmed the Marine Mammal Protection Act since the 70’s and is part of that legislation has reaffirmed how important public display to education, conservation research and the future of our planet,” Stafford said.

In the same 2016 nevalleynews.org video report, Danielle Riley was present and as chairman for Dolphin Free AZ said that dolphins are “highly intelligent animals and know when they are captive.”

“Researchers have documented them banging their heads against concrete tanks, gnawing on their teeth until they’re all the way down to the bottom of their gum,” Riley said.

Reportedly, Dolphinaris will be replaced by a new attraction that will not feature live animals.