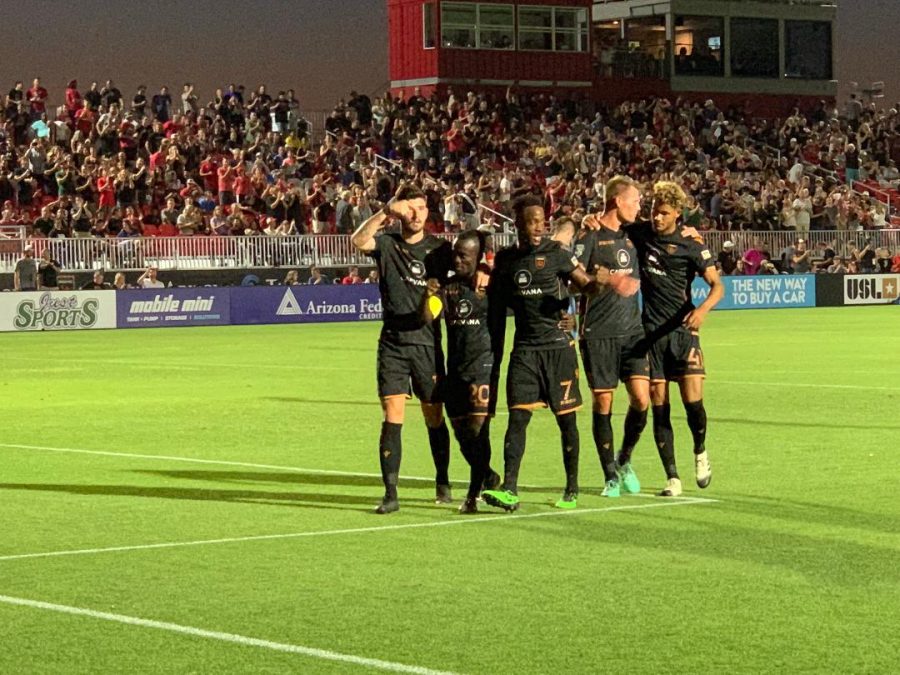 Solomon Asante with his teammates in Rising celebration

This is the tenth consecutive sellout for the club with 6,708 in attendance.

The first goal of the night came 13 minutes into the match when midfielder James Musa fired a long volley from midfield to forward Adam Jahn, who connected and scored with a straight shot.

Another goal was scored by Junior Flemmings on a pass by Jahn—propelling the Rising to a 2-0 lead.

To end the first half a yellow card was issued to Roughnecks defender Mallan Roberts for a penalty that allowed Rising’s Solomon Asante a free kick that turned into the 3-0 lead before halftime.

We’ve been working a lot on the midfield three and the front three and I think we gave Tulsa a lot of trouble and they couldn’t really play out of the back,” Schantz said.

In the start of the second half Flemmings kept the momentum going and in the 65th minute after receiving a crosswise ball from Asante sealed the lead with the fourth goal of the game.

Flemmings, capping play Friday night in a brace of goals and in what would be his final game before joining teammate Kevon Lambert on the Jamaican National Team, described his excitement in playing for the Gold Cup and being able to represent his country by calling it an “honor.”

Flemmings went on to describe the chemistry working alongside Asante and Jahn as the Rising trio has produced 22 of the 31 goals for the season.

“It starts in training, we understand each other…we know what each other are going to do and all that, so in the game it comes naturally,” Flemmings said.

Risings newest edition, midfielder Andrew Wheeler, who is on loan from Tucson FC, made his debut with the final goal of the game after being subbed in for Jose Aguinaga.

This set a new record for the Rising with five goals in a home match.

Goalkeeper Zac Lubin was vital to the shutout contributing three saves for the night and adding to his fifth clean sheet on the season.

Schantz is already looking ahead and preparing to have adjustments made to his offense with the absence of Flemmings.

Flemmings is one of his top scorers currently being tied at eight with most goals and is second in assists at six.

“Anytime you lose a player of that quality it’s difficult, but we know that Joey Calisrti will step out there and Jon Bakero can move on the front line,” Schantz said.

The Jamaican duo of Lambert and Flemmings will make their return back to the valley in July.

Rising will take on Orange County FC at home next Saturday at 7:30 p.m.