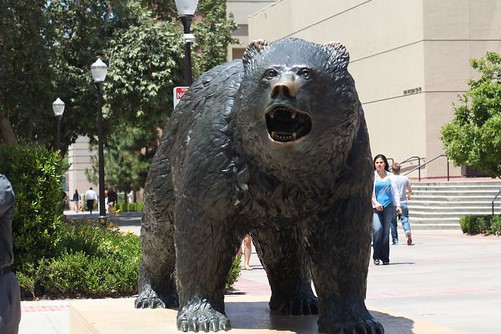 UCLA statue of Bruin outside campus of UCLA (Flickr)

In the opening round of the Women’s College World Series, held in Oklahoma City, OKL. (2) UCLA defeated first time World Series participants (7) Minnesota by a score of 7-2, a mirror-image of their tournament rankings.

In the Friday “winners bracket” game of the double-elimination tournament, (2) UCLA flipped the rankings for the final score when they defeated (6) Arizona in a 6-2 final.

The Bruins had their only score of the tournament, to that point, in their semi-final matchup against conference foe (3) Washington.

The Huskies took UCLA to extra innings, until two-time, National Player of the Year, Rachel Garcia, hit a three-run, walk-off, homer in the 10th inning to send the Bruins to the Championship Series against (1) Oklahoma.

It would be the first time in tournament history that the number one and number two seeded teams would face each other in the best-of-three, championship series.

The Bruins left no doubt in Monday’s first game of the series as they came out against the top-ranked Sooners and dominated the  Arizona State transfer, pitcher, Giselle Jaurez in a 16-3 UCLA slugfest.

But the second game of the series turned out to be much more competitive.

Jaurez was able to right the ship for the Sooners in the pitching circle and “Big Play” Shay Knighten lived up to her nickname with a clutch home run in the top of the 7th inning to tie the game 4-4.

The Sooner faithful would have to wait in extra innings and until the very last out of the game when sophomore, utility player, Kinsley Washington hit the game winning, RBI single, to score pinch-runner, Jacqui Prober from second base.

Since winning the very first Women’s College World Series in 1982, UCLA has appeared in the Championship Series in fully half of the tournaments.

Meanwhile, back in Los Angeles, the (1) UCLA men’s baseball team was fighting its way out of the “losers bracket” after another local school—much smaller, Loyola Marymount, showed that anything can happen in the postseason by pulling off a 3-2 upset of their Regional host.

After eliminating Baylor, UCLA would come back to defeat LMU twice to move on to the super-regional round.

The #1 ranked Bruins season came to an end on Sunday, June 9 after falling to an unranked Michigan team who came out of the Corvallis Regional as a #3 seed.

UCLA Baseball does not have the storied past of their softball counterparts having won the championship only once, in 2013 and finishing runner-up in 2010 to South Carolina.

It will be Michigan’s first CWS appearance since 1984.