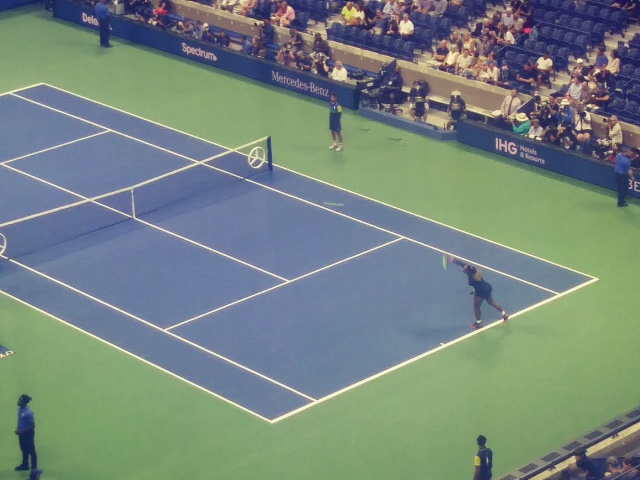 Serena Williams serving during 2019 US Open

The 2019 US Open set an all-time record for attendance with 737,872. Close to 1,000 matches were played. Nearly a quarter-million of the US Opens’ signature cocktail, the “honey deuce” were sold.

Rafael Nadal won the US Open men’s title and his 19th major, one shy of Roger Federer’s all-time record, in a thrilling five-set victory over young Russian Daniil Medvedev, 23.

No twenty something competitor has yet to win a men’s major singles title, highlighting the dominance of the 1980s born “Big 5” led by Federer, Nadal & Novak Djokovic.

They have now claimed 57 of the last 59 men’s major singles titles.

Bianca Andreescu, 19, of Canada, won the women’s title and in great contrast to the men became the first player born in the 2000s to win a major. She became the first Canadian major winner as well. In a dominating performance, she defeated one of the all-time tennis greats Serena Williams 6-3, 7-5.

This left Williams at 23 major titles where she has been for three years.

At 38, time may be running out for her to tie or surpass the all-time record. Williams already holds the record for the oldest woman to win a major at age 35.

In the juniors, Scottsdale native Alexa Noel had a good run but could not repeat her fabulous performance at the last junior major, Wimbledon, where she was runner-up. Noel and her partner, Diane Parry of France were defeated in the girls’ doubles quarterfinals by the eventual champions, Kamilla Bartone and Oksana Selekhmeteva. Noel also was eliminated in the quarterfinals in girls’ singles. The girl’s singles winner was Maria Osorio Serrano of Columbia.

Noel had a memorable US Open, also competing in the women’s main doubles draw at the age of 16 which she qualified for through her fabulous play this year as mentioned in last week’s article.

The boys singles title was won by Jonas Forejtek, of the Czech Republic, the #1 ranked junior in the world.

In the wheelchair men’s division, Gustavo Fernandez fell just short of completing the grand slam. He had won the first three majors of the year. Fernandez lost in the semifinals. The UK’s Alfie Hewett won the title.

The Netherlands’ Diede De Groot was the winner of the women’s wheelchair title.

Will Rafael Nadal or Serena Williams get the one major title they need in 2020 to tie their respective all-time records? Will more young players, especially men, follow teenager Bianca Andreescu into the winners’ circle?

The next major, the Australian Open, starts in Melbourne in January.