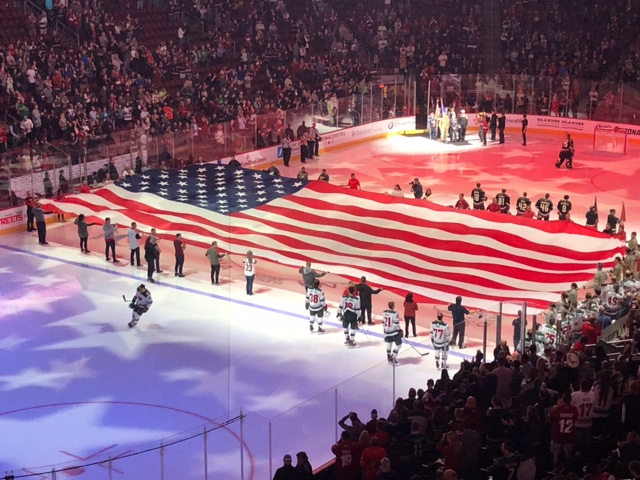 It was military appreciation night at Gila River Arena as the Arizona Coyotes dropped their third straight game on Saturday—and, after blowing the lead over the Minnesota Wild.

The first period began with Coyotes winger Michael Grabner, scoring his 5th goal of the season after the puck took a deflection off his skate and went into the goal in the 8th minutes of the game.

The Coyotes went up 2-0 after defenseman Jakob Chychrun scored his 4th goal of the season at 12:40 and after solid puck play from Phil Kessel.

The first period showed the Coyotes leading in shots, 8-5.

The second period started with Jordan Oesterle, in his first game back since injury, being called for hooking Wild forward, Joel Eriksson, in the 3rd minute of the period.

The penalty resulted in a power play goal for the Wild after captain Mikko Koivu scored his 2nd goal of the season off an assist from Jared Spurgeon.

This, the fourth goal the Coyotes have allowed on a power play in three games.

Vinnie Hinostroza briefly stole the momentum again for the Coyotes and scored a shot from the far-left side of the ice to put the Coyotes up 3-1.

But the momentum permanently shifted to Minnesota after two goals—one from Kevin Fiala and another from Matthew Dumba in the 13th and 19th minutes to tie the game 3-3 at the end of the second period.

The Coyotes have managed to lose the lead in four consecutive games.

In the game winning goal, the Coyotes forward line failed to cover Ryan Hartman as he accepted a wide-open pass and a win for the Wild, 4-3.

“For me, I can’t put my finger on the sense when some guys struggle. I think we’re cheating the wrong side off the puck, that’s basically it—we’re giving up some chances we didn’t give up in the first 10, 11 games of the season,” said Coyotes head coach Rick Tocchet.

“We’re still fine, we still got a decent record, but we’re wasting points away—we want to have these points in the bank.”

The Coyotes begin a three-day road trip on Monday when they take on the 2018 Stanley Cup Champions, Washington Capitals.