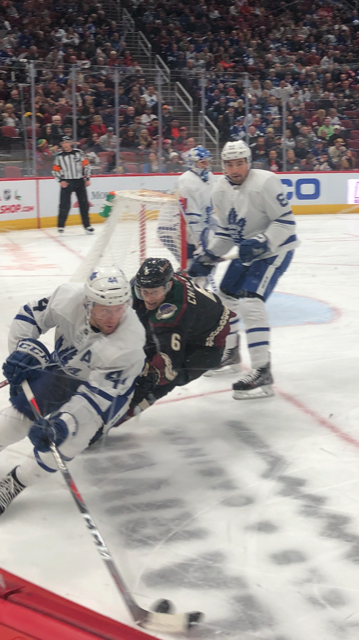 Coyotes, Jacob Chychrun, in pursuit of the puck

The Arizona Coyotes disappointed a home crowd on Thursday night against the visiting Toronto Maple Leafs which resulted in head coach Rick Tocchet saying, his team laid a “dud” against the struggling Maple Leafs that ended a six-game losing skid to the Coyotes.

The Leafs fired their head coach, Mike Babcock, on Wednesday—by Thursday they got their first win in a while with newly promoted head coach Sheldon Keefe as they almost shut out the Coyotes at Gila River with a final score of 3-1.

The first period saw the Coyotes generate a lot of offensive chances but to no avail.

Frederik Anderson was stopping anything that was in his vicinity—stopping 30 out of 31 shots on goal for the night.

The first goal the Coyotes gave up was with less than a minute to go in the game’s opening period Maple Leaf’s defenseman, Tyson Barrie, made his first goal of the season on a shot assisted by Jake Muzzin.

The second period was more of the same with the Coyotes struggling to get the puck into the net and conceding a goal while they were on the power when Maple Leafs rookie, Pierre Engvall. scored his first NHL goal in the 16th minute of the second period.

In the third period the Coyotes the Leaf’s scored 48 seconds in, and, after Coyotes defenseman Oliver Ekman Larsson had the puck stolen from him in front of the goal which resulted in Arizona local, Auston Mathews, scoring the Maple Leafs third goal of the game.

The Coyotes finally scored a goal with 10 seconds to go when Vinnie Hinostroza nabbed his third goal on the season mercifully ending the game in a 3-1 loss and dropping the Coyotes to 13-8-2 on the season.

“They were skating— we weren’,t they wanted it more they were jumping, we weren’t.”

They Coyotes compete in a quick road trip game on Saturday as they face division rivals the Los Angeles Kings.  The puck drops at 2 pm Mountain standard time.