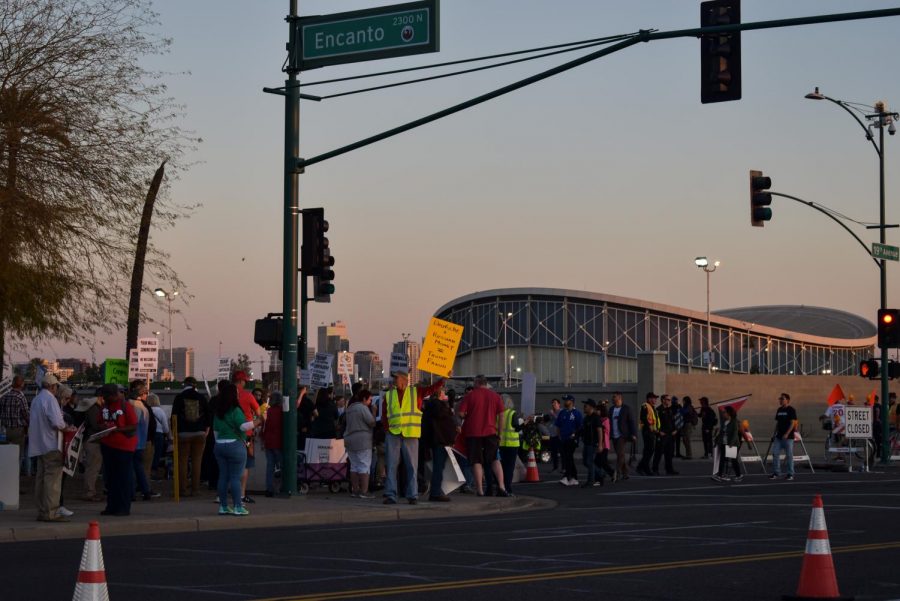 protestors in front of Phoenix Coliseum

President Donald Trump held a campaign rally Wednesday, in Phoenix, at the Arizona Veterans Memorial Coliseum located on the site of the Arizona State Fair.

The coliseum was filled to capacity and there were still people in line outside the venue hoping to get inside.

Protestors showed up too.

Some supporters of Donald Trump were determined enough to get inside to hear the president that they waited in line—some opting to camp out the night before.

A few thousand local anti-trump protesters gathered around the Coliseum too—they positioned themselves near entrance points or those street corners as they chanted, held signs, shared their viewpoints, and took advantage of their first amendment rights.

Eddie Chavez Calderon the campaign organizer for Jews for Justice was a loud voice at the protest yesterday and told Northeast Valley News that everyone protesting was there to reject hate and to protect different communities.

“We are here to reject hate. From the LGBTQ community from the black, African American community and from the Latinx community. Everybody’s getting affected by this rise of hate, bigotry and division so, we are here to stand up boldly and reject, unapologetically, that the hate is not welcome here,” Calderon said.

Protesters were very vocal regarding the hate that is being experienced within the nation and how they want unity.

Individuals from both sides expressed to Northeast Valley News that they want the same things but saw policy and law very differently. Both supporters and protestors are polarized when it comes to priorities for the country.

After the rally was over some Trump supporters came across the protesters and a few began to join in the sharing of viewpoints.

One individual who wanted to be referred to as “Vafa” was among those who wanted to advocate dialogue between Trump supporters and protestors.

“I always think there should be more and more people out, advocating. I’d like to see less yelling and more talking like there was over there cuz that’s how you get the point across right? Like no matter what side you’re on— just cussing at each other is not going to get shit done,” Vafa said.