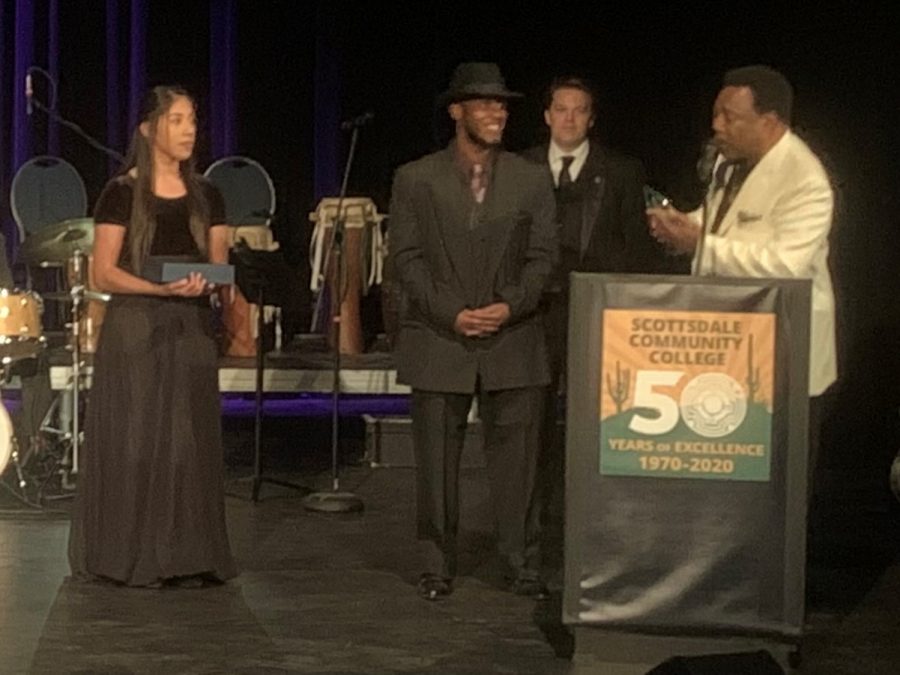 On Feb. 8, Scottsdale Community College held their annual music showcase “A Spectacular Night of Entertainment”, to honor the recipients of the George Benson Honorary Scholarship, presented by George Benson himself.

Benson, a legendary jazz singer and guitar player, was well received by the audience at the SCC Performing Arts Center (PAC).

Benson is an Arizona native with a star on the Hollywood Walk of Fame and 10 Grammy Awards on his shelf.  Best known for his remarkable skills as a jazz musician, Benson is also known for his efforts in Blues, Pop and R&B.

“He is so generous with his time.  He has only not been able to come one year, I think, because of a scheduling conflict,” Stich said.  “But now that it’s kind of on his radar as a yearly event, it goes pretty smoothly.”

This year’s winner, military veteran and pianist, Karen Wright, treated the PAC crowd to performances of Reverie, Op. 39, No. 21 by Peter Tchaikovsky and Sonatina in C Major, Op. 55, No. 1 by Friedrich Kuhlau.

According to a Maricopa Community College press release, an honorable mention winner was added in 2017.  This year’s honorable mention, Shontionn Pridgon, has appeared on NBC’s “The Voice”.

In addition, the showcase featured other SCC faculty and music department students, as well as musicians from nearby Saguaro High School, banding together for performances in a variety of musical genres.

Ibanez, a popular guitar manufacturer and one of the Music Departments sponsors, showed further support by donated a guitar, autographed by George Benson.  The guitar was auctioned off following the event with all of the proceeds going directly to the Music Department.

Stich is already thinking about next year, as it represents an important anniversary for the event.

“This year I thought it (Music Showcase) went really well.  I thought the audience was really into it and enjoying it,” Stich said.   Next year is our 10th anniversary for the scholarship, so we are already kind of thinking about what we can do next year to make a bigger splash for like a 10th anniversary kind of event.”

Future scholarship applicants should contact the Music Department at SCC for scholarship details.