The House Holds All the Cards 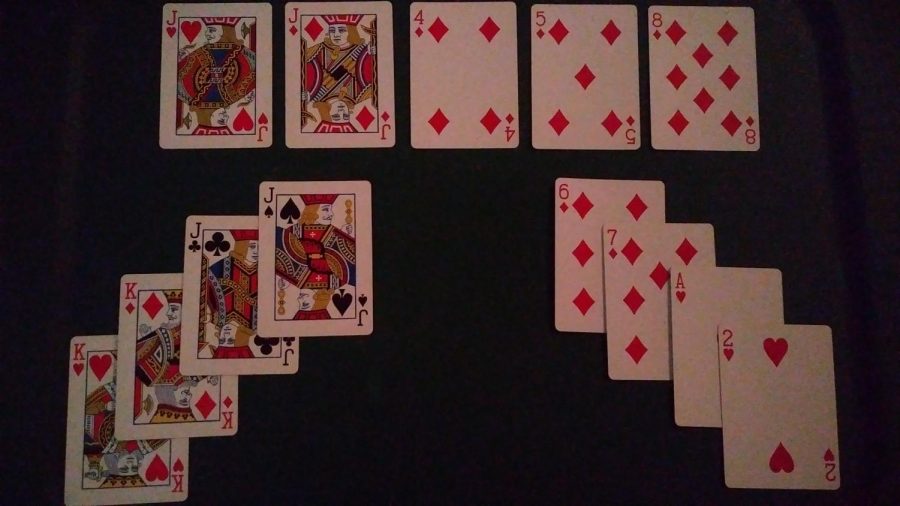 Competitive poker player and gambling professional, Michael Russell, will offer his expertise about all things gambling.

As a life-long gambler, poker player and a bit of a self-proclaimed expert on gambling…the number one rule to remember when you walk into a casino, any casino, is this—the house holds all the cards.

Many years ago, I was sitting around a poker table on a crowded Friday night at the local casino with several other players. The casino waitress was serving drinks to the players at what was turning out to be a lively and friendly game.

After a long shift, the dealer, (Misty) dealt her last hand.

The game was Omaha High-Low—four cards to each player, a community card game like Texas Hold’em with the pot being split between the best high and best low hands.

I looked down to see that my first two cards were kings, but I was focused on getting two more good cards to this promising hand.

My concentration shifted when the waitress spilled a drink on “Abe,” one of the players at the table.

Soaked in a margarita, Abe wanted to carry on as though nothing had happened and told the dealer, “Keep dealing, I’m down five hundred bucks.”

The dealer continued dealing where she thought she had left off.

By now, everyone had their four starting cards.

I saw that I had a pretty nice hand- two jacks to go along with my two kings, I raised, and several people called to see a nice flop for me: jack, jack, & the four of diamonds. I had made four of a kind, a rarity, right away.

It also happened to be Monte Carlo Night, where a player would receive a $500 bonus for making four of a kind!

This pot— that I just knew I was going to win—was growing by the minute.

To my delight, other players were betting and raising as the five of diamonds came on the next card, making a flush possible which they no doubt had.

The last card, “the river,” was the eight of diamonds.

Everyone went crazy betting and raising, including me, of course.

And then…”give me the pot,” I said…as I flipped over my four jacks.

Rosie flipped over the six and seven of diamonds for a straight flush in diamonds to beat me, and the whole table went nuts.

Still, when you lose with four of a kind or better, you win the casino’s progressive bad beat jackpot.

Eventually, the floor person came over to congratulate us and left to check the cameras before paying out the money.

There was a pretty nice buzz in the room as we all realized an unexpected windfall.

We were laughing and joking. Abe (his head still wet with Margarita) was a good sport.

Everyone had a blast playing the next two hours when Barbara, the casino supervisor, came over with some bad news.

You guys aren’t getting any jackpot, and I’m sure you can guess what happened.”

‘What do you mean, no jackpot?” Abe said.

“The hand was a mistake.

The dealer (Misty) stopped dealing when the drink was spilled on Abe—when she started again, she began in the wrong spot, so the hand was a misdeal.

Deflated, I went home, promising not to return.

A few days later, my friend and fellow card player, Dave, called and told me they had fired the dealer (Misty) over the incident.

That made me feel even worse.

A young woman, out of a job, for one mistake? Sometimes “the house” sucks.

I had no desire to play, in fact, I didn’t play for the next ten days.

A few nights later, actually, it was 4 a.m. — I got a phone call from the overnight supervisor at the casino.

She proceeded to tell me that even though the hand was a mistake, the casino board (or,” the house”) voted to pay off the $15,000 in the interest of customer relations.

What? Is this a prank call?

I got in my car and drove to the casino before they could change their minds and not only did they pay me the $7500 for the jackpot, they gave me back my $500 bonus as well.

I took a nice little celebration trip to Disneyland with the family.

Oh, one last thing…Misty, the dealer who had lost her job, well, I saw her at a Home Depot a few years later.

We spoke and she said she was expecting her first child and had met her husband at the new job she got after being fired from the casino.

She was very happy in her new life.

Best payout of all.