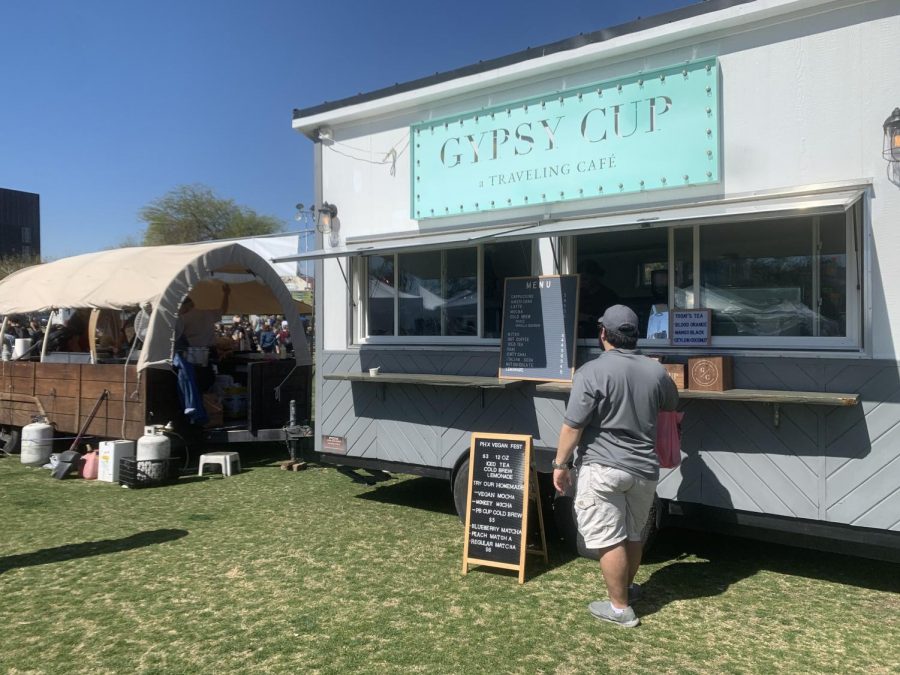 On Feb. 29 –Mar. 1, Margaret T. Hance Park, in Downtown Phoenix, hosted the fifth annual Phoenix Vegan Food Festival.  The event featured over 100 vendors and there were food trucks for vegans and vegetarians alike.

It was a completely animal-cruelty free event and all of the food trucks were strictly meat-free.

The Festival had a vendor booth for everything you could possibly need for your 12-hour, vegan, day – jewelry, clothing, snacks and zero-waste reusable items to replace plastics, to name a few.

One of the vendors at the festival, “Stackaracks”, sells hand-crafted, lava rock, pieces.  The mother/daughter duo started selling jewelry as a fundraiser to help someone who had lost a leg in an accident.

“This is our first time here at the vegan fest this year. So it’s really exciting, we have friends that are a big part of the festival and that got us involved this year,” Shaw said.  “We’ve done other vendor events, but it’s our first appearance here and it’s a really great event. So we are glad to be a part of it.”

Along with the food and shopping, there were live musical performances throughout the day.  The festival featured a Main Stage at one end of the park and a smaller, acoustical stage at the other end.  There was music for all tastes, from mystical, red-rock, music from Sedona’s “Decker”, to the high energy, Indie-rock sound of 76th Street.

In addition, there were also live cooking segments in the center of the park and free yoga sessions every 30 minutes from 12 p.m.-3 p.m..

There were vendors seeking to challenge themselves to become vegan, even if just for a day. Gypsy Cup, a travelling café, described what being involved in the Phoenix Vegan Festival meant to them.

“We aren’t an exclusively vegan truck — we are just when we are coming here. So for us it just something that we like to do to be in the community, because we have so many vegan, vegetarian, plant-based followers. And so it means creativity and I don’t know, how to take a new spin on something that’s traditional, ya know,” Smith said. “I feel like vegan stuff is really high vibe and the energy is always really good.”

The event takes place at Hance Park, around the same time each year.