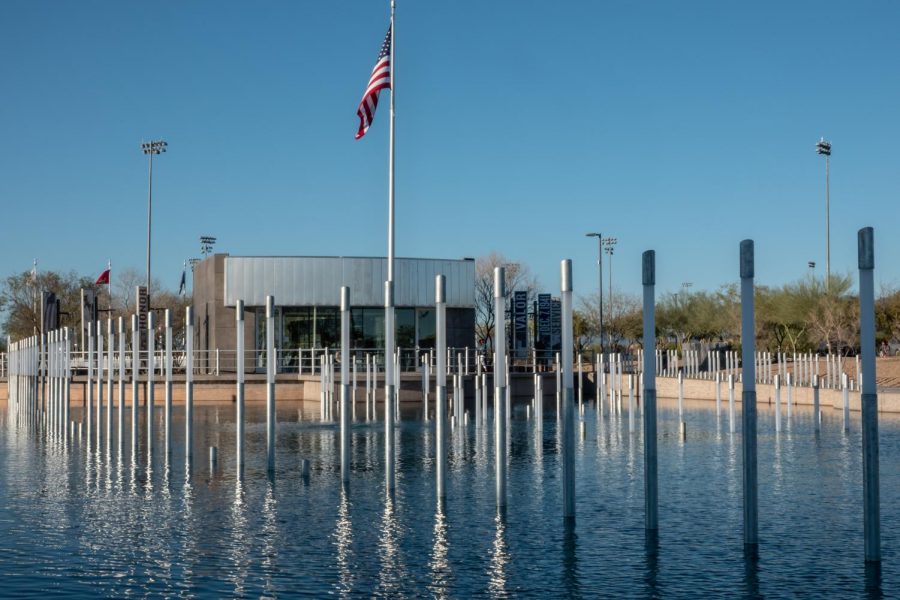 On Dec. 7, 1941, Japanese pilots bombed and sank the USS Arizona, killing 1,177 sailors and Marines.  A memorial now stands behind Salt River Fields at Talking Stick to honor the lives lost on that fateful day which ultimately drew the United States into WWII.

The memorial garden features a small lake and 1500 columns representing each person aboard the ship that day.  A number of columns form the outline of USS Arizona and surround a structure containing a portion of the boathouse of the ship.

“The journey of bringing the relic to the Salt River Indian Community began in 2007,” McAnlis-Vasquez said.  “Fast forward several years, hundreds of emails and heartfelt conversations later — not until we received it, physically received it did we realize it weighed over 1,500 pounds and was as big as it was. So, it, like I said, was multiple years of effort and love, and blood, sweat, and tears type of thing to bring it here.”

When entering the memorial, each member that was aboard the USS Arizona has their name engraved and immortalized on small, “stacked blocks”, located just beside the doors to the entrance of the relic.

Nena Soos, a worker at the memorial, talked about the emotions felt by veterans and family members of veterans visiting the memorial and how they feelings of seeing their loved one’s names written in stone.

“Hearing and appreciating it, being so close to home and feeling like overwhelming and feeling the presence of them here and just thinking and thanking us for it being so close and that, you know, having this piece here,” Soos said.

McAnlis-Vasquez discussed future gatherings in memory of the lives lost during the Pearl Harbor attacks.

“We have several community veterans focused events that will probably stay within the community. But I think our efforts will be expanded. So, we will probably do veterans, you know, Veterans Day ceremonies.” McAnlis-Vasquez said. “But I think our bigger focus is on bringing education on military and conflicts to the public. And that would be through lecture series, through having art installations, and things like that being brought up to the garden space.”

Admission to the memorial is free.  The garden is open to the public from dawn until dusk but the relic room closes at 4 P.M. daily.