Phoenix protesters call for Justice on behalf of George Floyd, several arrests made 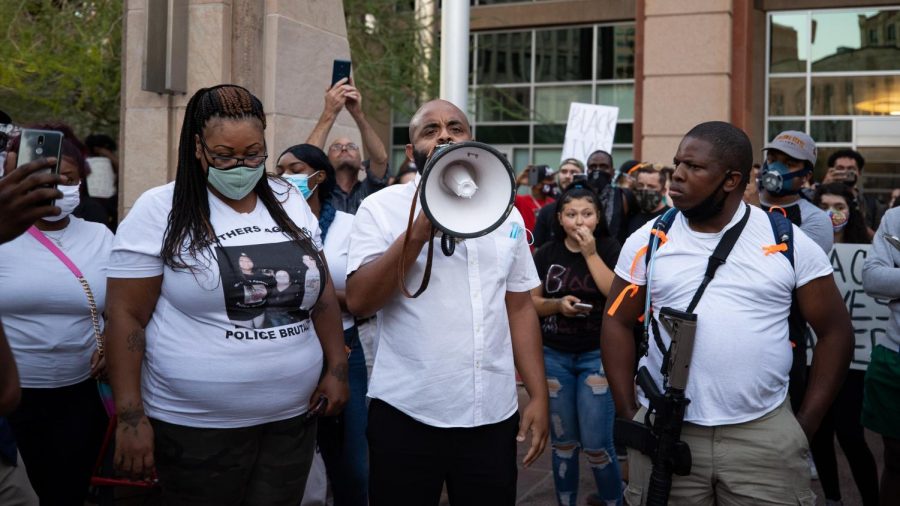 On Thursday, May 28 protesters gathered at Phoenix city court in downtown Phoenix at around 7:00 p.m. to bring awareness of the injustice in the killing of George Floyd who died on Monday.

Floyd died in the custody of the Minneapolis  police department when the arresting  officers’ knee was on Floyd’s neck for more than 7 minutes. Video footage of this scene became viral and the protesters are calling for the arrests and charges of murder to the police involved.

Chants like “No justice No peace” and “Hands up, Don’t shoot” echoed through the outside halls and streets of Phoenix City Court and Washington Street both located in Downtown Phoenix.

The Phoenix gathering was organized by local activist Jarrett Maupin and All Black Lives Matter Arizona.

Speakers attended the protest to speak on behalf of their loved ones that have been involved in police shootings.

Dalvin Hollins was 19 years old when he was shot and killed by Lt.  Edward Ouimette after a Walgreens employee reported an armed robbery in Tempe, in 2016, according to CourtHouse news.

According to reports, the employee at Walgreens claimed the suspect was wearing a grey shirt, had his hand in a black bag and claimed to be armed.

The description of the suspect was released and an officer spotted Dalvin nearby and tried to talk to him.  He was shirtless and unarmed, according to the article.

Ouimette approached the scene in his patrol car and saw Dalvin run away towards a senior center where then Ouimette later stated that he feared there could be a hostage situation.

Dalvin ran inside the senior center after being shot in the back, where he was later found dead of his injuries in a closet.

No gun was ever found on Dalvin or at the scene, according to the article.

“The decision to shoot, therefore, under Arizona law, is a permissible use of deadly force, and there is no evidence to permit a conclusion that charges could be filed for a crime under Arizona law,” Montgomery said.

While Ouimette was wearing a body camera at the time of the shooting, it was not activated.

At the protest on Thursday 8 arrests were made according to Az Central, while the protests in Minneapolis and Los Angeles have escalated, the scene in Phoenix was peaceful until tensions rose because of riot police.

Department of Public Safety troopers engaged with the protesters. Maupin said it was DPS Director Heston Silbert, who calmed the escalating situation down.

Maupin, in an interview with The Arizona Republic, later in the night, called the protest successful, according to the AZ Central article published on Thursday.

“Things got a little rough there towards the end. The Capitol was our end game, and we made it there,” he said. “Our event was nonviolent.”

After 9:40 p.m. police started using non-lethal force in efforts to disperse the crowd and the police department declared the protest as an unlawful assembly and therefore its participants were subject to arrest.

Pepper spray bombs were used, and this angered some protesters who then proceeded to throw rocks at patrol cars.

On Adams Street, just east of the Arizona State Capitol, protesters surrounded a police SUV where a window was smashed with a skateboard at around 9:45 p.m.

Police then jumped out of the vehicle, opened the back to pull out shields where the protesters put their hands up in the air and moments later a loud boom, the first of many, went off and protesters started coughing and dispersing according to the AZ Central article.

Protesters continued to confront police until around 1:30 a.m. while being shot at with rubber bullets and sprayed with pepper bombs.

By 2:00 a.m. the area was clear of protesters and police.

Police Chief Jeri Williams said her officers “engaged and reacted amazingly” during the demonstration, saying the department had learned lessons from previous rallies in how to respond in situations when emotions run high. She also pledged her officers would support and assist those who wanted to gather in peaceful protest but would not tolerate criminal damage according to an AZ Central article published on Friday.

“If you want to protest, please make it peaceful and we will be there to help, support and assist,” Williams said.