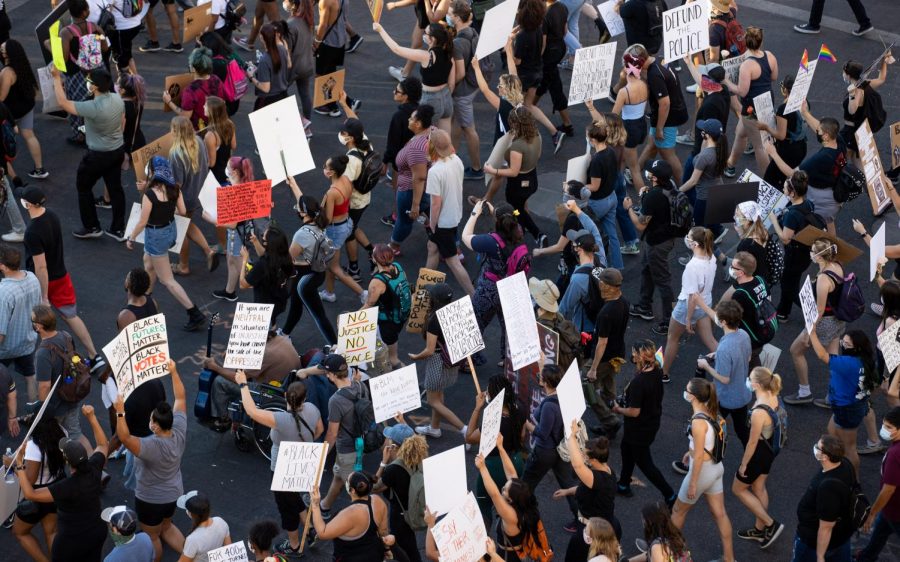 Protests against police violence have been peaceful, with gatherings starting at around 4 to 5 p.m. and ending before 8 p.m. every night since a statewide curfew was  implemented on May 31, by Gov. Doug Ducey.

Even though the curfew has expired, the protests have continued to end at or around 8 p.m.

As a result of the protests, initiatives such as the Justice in Policing Act, Breonna Taylor Law and charges being filed against the officers involved in George Floyd’s death are a reality.  The movement hopes to defund the police and some are even calling to abolish the police.

Protesters want funds earmarked for police departments to be transferred to the education system, affordable housing institutions and health care.

E-Christian from Cleveland Ohio, a leading protester for We Rising Phx, spoke to northeastvalleynews.org on Tuesday night, when he expressed his concerns about events that occurred at protests on Thursday night of last week, but is bolstered by the support shown around the world and would like to see more action.

During this Thursday night’s protest, the energy was consistent with reallocating funds to communities and social programs instead of police departments.

Tempe City Council approved a $777.6 million budget that includes nearly $97 million in funding for the police department despite the protests of the last 15 days according to an AZ Central article.

Residents urged the council to redistribute a portion of the police budget to the Human Services and Sustainability departments, mental health services, education programs, affordable housing initiatives and efforts to end homelessness.

Council members said they appreciated the feedback and heard residents’ concerns but refused to make adjustments without further studying the proposals.

Mayor Mark Mitchell said any changes to the budget need to be made “thoughtfully.”

Vice Mayor Lauren Kuby said the council has received hundreds, if not thousands, of emails from residents and community members ahead of the meeting but expresses it’s easier said than done according to the AZ Central article.

Kuby explained that it’s not as easy as slashing a percentage of the police department’s budget and throwing the money at another department.  Time to evaluate  how the budget reflects the city’s priorities and creating performance measures — like working toward reducing the city’s poverty level– will guide budget conversations in the future, she said, according to the article.

“People want action and I completely agree that we can’t go on as before,” she said. “But we’re not going to create change in one night or in one or two budget meetings.”