Coyotes advance through qualifying round with series win over Nashville 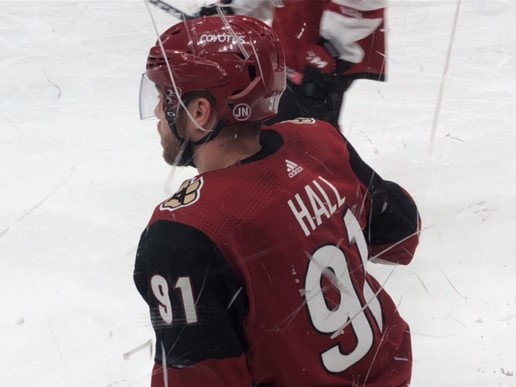 Taylor Hall scored a goal and had three assists is the Coyotes qualifying series win over Nashville.

A coronavirus-interrupted season, an interim general manager after John Chayka resigned, a high-security NHL bubble and a #11 seed going into the league’s qualifying round were not enough to keep the scrappy, and apparently hungry, Arizona Coyotes from taking advantage of their “second chance” at the playoffs.

After months of not being sure whether the season would even continue, everything seemed to happen at once for the Coyotes.  The players and owners agreed to a new collective bargaining agreement, a plan to hold the playoffs within secure “bubbles” in the cities of Toronto and Edmonton was announced, players had to organize their affairs and say goodbye to families who they wouldn’t see for weeks.

Amid all that, their general manager decided to call it quits the day the team left for their hub city.

With all of that happening off the ice, the team still had to prepare for what would transpire on the ice, when they faced the #5 Nashville Predators in the qualifying round for the first round of the playoffs.

Interestingly enough, Arizona could take some inspiration from the fact that the Predators were the last team they defeated in the playoffs – even though that was the second round of the 2011-12 postseason.

The qualifying round was slated to be a best-of-five series, a format which creates a distinct advantage for the team who strikes first.

Arizona did just that, as they came out swinging in game one with a group of usual suspects leading the way.  Captain, Oliver Ekman-Larsson, Christian Dvorak and Clayton Keller all lit the lamp in the first period.  An advantage that Nashville came close to, but couldn’t overcome, giving the Coyotes the fast start they needed.

Their game-one victory didn’t come without adversity though.  Goalie Antti Raanta left the bench during the contest and was subsequently declared “unfit to play”, leaving the backup duties to Tucson Roadrunner, Adin Hill, for what turned out to be the remained of the series and possibly longer.

The Predators rallied to win game two, but former Minnesota Wild goaltender, Darcy Kuemper was able to come back and hold off Nashville until teammate Brad Richardson was able to score the overtime goal in game four that gave Arizona the series win.

Richardson summed up the series win for his team during the post game press conference as sometimes only a hockey player can.

“We went through a lot of crap here,” Richardson said.  “It just feels like a lot of hard work came to fruition there.  You know we’ve still got a long way to go, but that’s a big hurdle for our team and it feels really good.”

Arizona will not know their first-round opponent until the round-robin seeding tournament concludes on Sunday.