U.S. Senate candidate, Mark Kelly, could be sworn in as early as Nov. 30 if he wins: possibly thwarting attempts at a Supreme Court “rush” appointment by the GOP 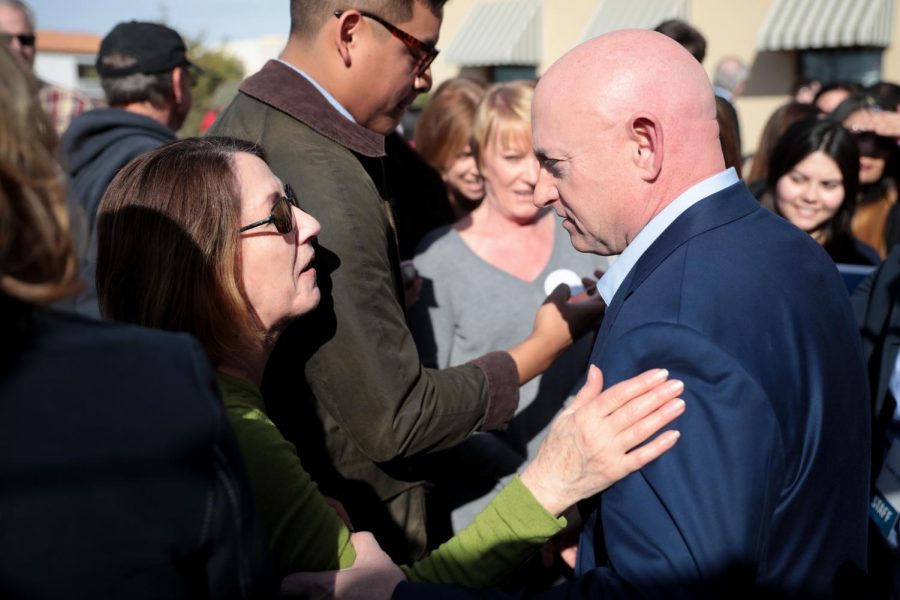 Mark Kelly with supporters at a Phoenix rally in early 2020

An Arizona law dictates that Kelly, if successful in his race for senate, could be sworn in by Nov. 30, during the lame-duck session of Congress—and when, Republicans have said, may be another possibility to try and push through a Ginsburg replacement on the Supreme Court.

Even though the Kelly vs McSally race will be held on Nov. 3, it is technically a special election to fill the seat vacated by the late Republican McCain.

McSally was appointed to fill the seat only and until the election.

Kelly, the husband of ex-representative Gabby Giffords is ahead in recent polling against McSally.

Appointed to the senate seat in 2018 by Governor Doug Ducey, and after a substantial defeat by Democrat Krysten Sinema for the U.S. senate seat vacated by retiring Jeff Flake.

McSally became Ducey’s replacement choice for the late Senator, John McCain— an appointment seen by many, as an insult to the wishes of some McCain family members as well as other prominent Arizona Republicans.

Ben Domenech, the husband of Meghan McCain the late senator’s daughter and outspoken member of the ABC, talk show, “The View,” said prior to the announcement, that McSally would be an “unwise choice.”

“She’s like an NFL team that plays down to its opponents’ level, Domenech wrote, “And, she’ll be tasked with running for re-election immediately.”

A win for Kelly would also nick away at the current Republican majority in the U.S. Senate 53-47 even as Republican senators are rushing to find a way to fill the vacancy on the Supreme Court left by Justice Ginsburg’s passing.

Opponents of an appointee rushed by the current senate GOP majority leader, Mitch McConnell, means that the winner of this race could place it as a defining moment in U.S. history.

Proponents of LGBTQ rights and women’s reproductive rights, to name a few, are keenly aware of the vital rulings that come down from the last stop of legislative and legal appeals—the Supreme Court.

A GOP appointed Supreme Court Justice could mean that a stacked conservative majority on that bench would hear and rule on repeals of many of those same rights already determined through previous Supreme Court rulings.