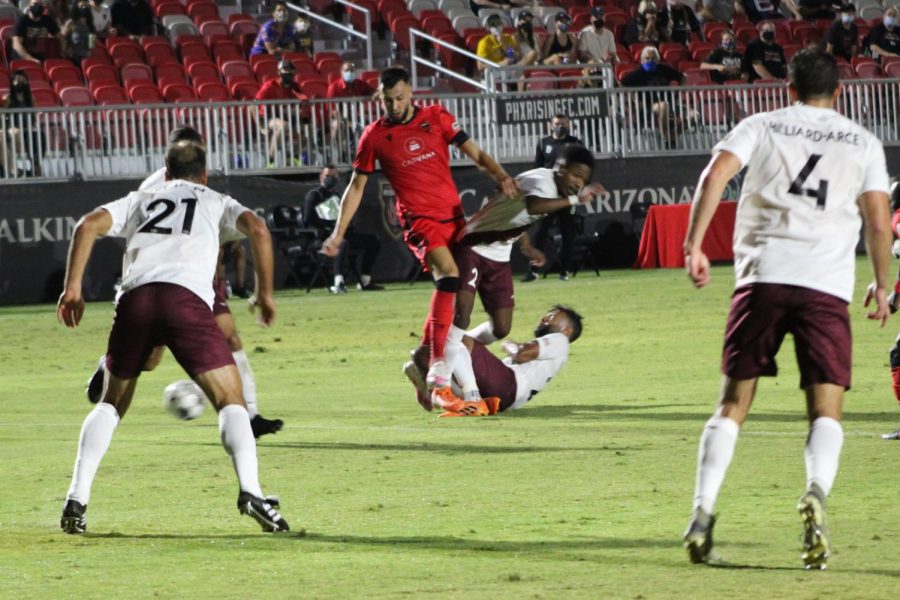 Not a lot of scoring.

Phoenix Rising eased into the playoffs on Saturday night against Sacramento Republic.  Rising, who almost seemed able to score at will at Casino Arizona Field earlier in the season, struggled to put any sustained pressure on Sacramento goalkeeper Rafael Diaz.

Granted, Rising was without their leading scorer and Golden Boot winner, Junior Flemmings for the second game in a row.  ESPN reported on Tuesday that Flemmings had been suspended by the USL for six games after their investigation determined that Flemmings had used an anti-gay slur against a San Diego Loyal player during their match on Sept. 30.  The suspension will make him unavailable for the entire playoff season.

Interim head coach Blair Gavin was at the helm for his second straight game as Rick Schantz also remains on leave.

Sacramento seemed to focus on stifling Rising’s trademark rapid transition to the offensive zone.  They seemed content to play Rising at midfield.  Willing to slow down the game and converging on any Rising player attempting to move the ball into the scoring box.

The strategy seemed to work as the two clubs played to a scoreless draw.

It seemed only fitting that team captain Solomon Asante was the hero for Phoenix in extra time.  It took 114 minutes before Santi Moar, now a regular in the starting lineup, made a hard pass to Asante who deflected it into the Sacramento goal.

Rising travels to Nevada to face Reno 1868 in the conference semifinal Oct. 17.  Should they upset the league point leader on their home pitch, Rising would host the conference final and league final, according to the team.