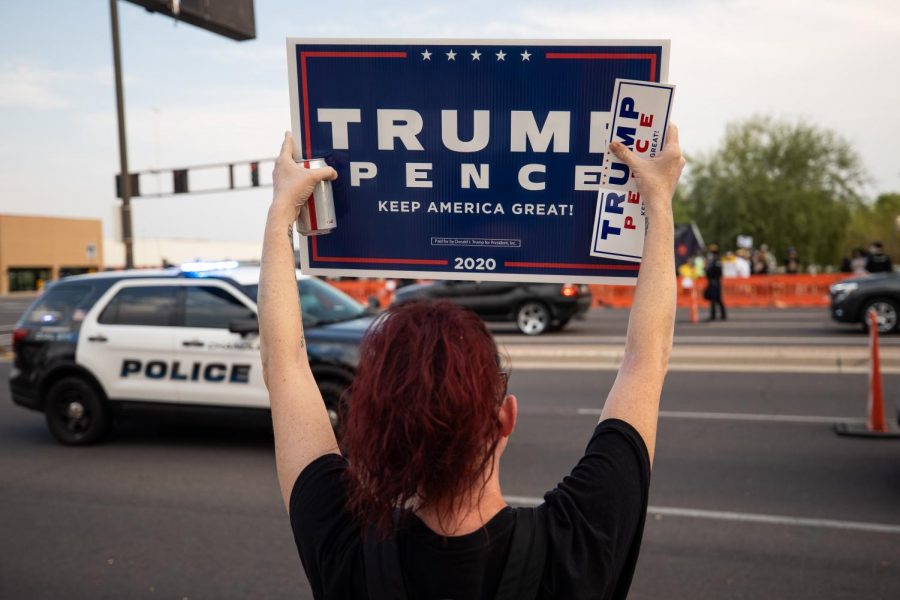 A demonstrator holds Trump-Pence sign during an earlier protest near Phoenix.

On Wednesday night, a group of around 300 people gathered in front of the County Recorders Office where Maricopa County election workers were counting the remaining ballots from the previous day’s election.

A group called the AZ Patriots claimed that votes had been stolen from President Donald Trump.

Reports say that some of the people gathering with Trump flags were armed, and chanted “count the votes” and “Fox News sucks,” after the TV network called Arizona in Joe Biden’s favor with only 75 percent of the votes counted.

Some vote center workers and members of the media were escorted to their vehicles for their safety, officials said, according to the NBC News report.

Arizona is still in the process of counting votes, with Biden in the lead with 50.5 percent and Trump at 48.1 percent with 88 percent reported, protesters say it was reported before time and that all votes must be counted since it is a close call still at this moment.

Claims of Sharpie pens making ballots invalid circulated on the internet but officials say that this claim is not true and Sharpie pens do not disqualify ballots.

Shortly after, demonstrators were kicked out of the building where they stayed in the parking lot of MCRO.

Demonstrators for both Trump and Biden supporters gathered in the parking lot discussing their view points.  A live stream being watched by Northeast Valley News showed that when tensions rose, Maricopa County Sheriff deputies stepped in and separated the groups to gain control of the escalating situation.

According to the AZ Family report, Jennifer Harrison, a leader for Arizona’s Patriot movement, used a megaphone calling out Adrian Fontes, head of elections for Maricopa County, stating “Where are our votes, Adrian?”

The group then moved to the Arizona Capital Building, stayed for half an hour before moving back to MCRO. Mostly Trump supporters were present and chanted “four more years” and “count the votes”.  Others chanted “stop the steal,” implying Biden was stealing the election, according to the article.

Rep. Paul Gosar, who won reelection to AZ House District 4, arrived at the protest where he talked to the group and led them in prayer.

Sgt. Calbert Gillet, a spokesperson for the Maricopa County Sheriff’s Office, told NBC News that no arrests were made.

Demonstrations across the country have occurred.  In New York city, 50 people were arrested.

Reports from there say a large police presence was met with a crowd of 1,000 peaceful protestors once they reached Washington Square Park.

NYPD said more than 20 people were arrested in West Village because they “attempted to hijack” the peaceful protest by lighting fires and throwing garbage and eggs at police, according to NBC New York, it was not immediately clear what charges they faced.

While there were more arrests in other parts of the city, New York City Mayor Bill De-Blasio said, “I think we can safely say that the vast majority of people simply want to see the election results counted fairly. They want to know a result as soon as possible and then we are all in a position to then move forward.”

De-Blasio adding that he doesn’t see a “particular problem” at the moment with numerous out-of-state agitators. “What the majority of New Yorkers want is just a peaceful approach to this election dynamic and the ability to move forward and move on,” he said.

De-Blasio also spoke at a coronavirus press briefing on Thursday where he said that any attacks on people and officers or property “will experience the consequences,” de-escalation of any situation is always the goal, he said, according to the report.

In Portland, Ore. the National Guard was called to be deployed by Gov. Kate Brown because of tensions running high following a mostly peaceful protest at the start of the day on Wednesday, but ending with reports of “widespread violence”, according to a USA Today article.

In Los Angeles, several demonstrators were detained, according to USA Today.  LA Police Department officials announced a citywide tactical alert for the second day in a row  “to ensure sufficient resources to address any incidents that may arise as a result of Election Day activities.”

USA Today reports that demonstrations from both sides are scheduled across the nation from now through Sunday.