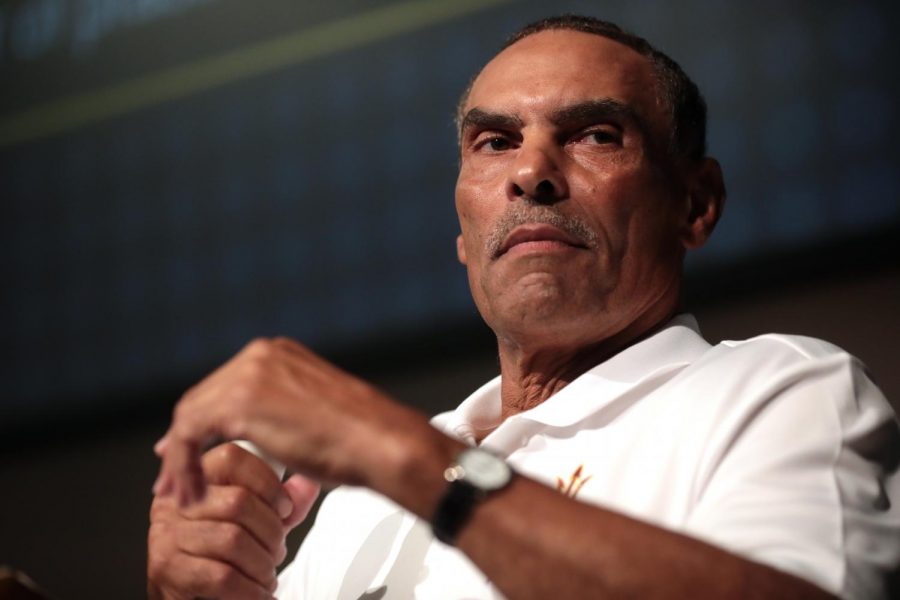 Don't mess with Herm! ASU had its game with Cal canceled because of multiple COVID-19 cases including Head Coach Herm Edwards

Social distancing has become the new societal norm that most citizens strictly adhere to. However, after last Saturday’s upset win over the top ranked Clemson Tigers, Notre Dame Fighting Irish fans stormed the field in excitement and packed together around their team against all social distancing requirements.

On any Saturday, viewers can see bare-faced coaches, chaotic student sections and unmasked spectators at stadiums which allow fans.  The Notre Dame incident is only one among many, that when coupled with more than a dozen COVID-19 related cancellations this week, may cause college football fans to wonder how much longer their favorite teams will be allowed to play.

Clemson and Notre Dame aren’t the only teams fearing an outbreak or a suspension to their season.

The classic SEC rivalry between Louisiana State University and the University of Alabama has been postponed amidst an outbreak of positive COVID tests at LSU.  LSU was one of several schools who were forced to temporarily halt their summer workouts after they had just begun.

Fellow SEC member Texas A&M had to postpone their matchup against Tennessee until Dec. 12 due to an outbreak of the virus at Texas A&M.  The conference had the most disrupted games this weekend with four.

“While it is unfortunate to have multiple postponements in the same week, we began the season with the understanding interruptions to the schedule were possible and we have remained focused throughout the season on the health of everyone around our programs,” said Greg Sankey, Southeastern Conference Commissioner.

Along with the other two games cancelled within the SEC this weekend, Auburn and Mississippi State has been delayed until Dec. 12 from — you guessed it…an outbreak of positive COVID-19 tests.

John Cohen, Director of Athletics at Mississippi State University announced the postponement in a statement.

“Based on positive tests and those considered as close contacts, along with non-COVID injuries, we do not have the minimum number of scholarship student-athletes available for Saturday’s game against Auburn,” Cohen said. “While we are disappointed that Saturday’s game has been postponed, our priority is the health, safety and well-being of our student-athletes and staff.”

Unfortunately, that phrase “we do not have the minimum number of scholarship student-athletes available” was announced numerous times over the last few days.

CBS Sports reports that around 30% of this week’s college football games were postponed or cancelled as a result of COVID-19 concerns.

Closer to home.  Two PAC 12 games were cancelled this week, including Arizona State’s game against California.

It is being reported that Arizona State is suffering from numerous positive tests including head coach Herm Edwards.

The University of California, who were set to face the Sun Devils on Saturday have not played a single game yet.  Their season opener was cancelled due to their own COVID-19 issues, but their second and third games were called off when their opponents couldn’t field a complete team.

Adam Wells reported for Bleacher Report today, that a game between Cal and UCLA has been scheduled on Saturday after UCLA had their previously scheduled game this weekend cancelled because of COVID-19 issues for Utah.