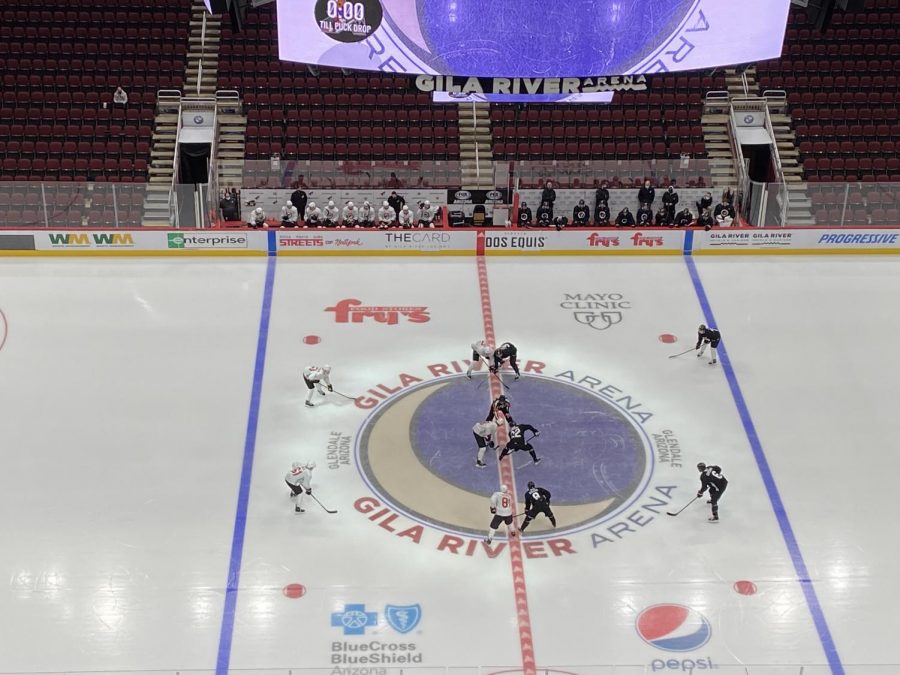 Travis Boyd and Blake Speers are among the quartet of Coyotes skaters signed to new deals this week.

The Arizona Coyotes are ready to hit the ice for the 2020-21 season, looking to improve after their first-round playoff exit against the Colorado Avalanche in August of last year.

The Coyotes made several signings this offseason to bolster their forward depth.

Derick Brassard joins the Coyotes after a decent year with the New York Islanders where he played 66 games with 10 goals, 22 assists for 32 points on the regular season.

Tyler Pitlick joins the Coyotes after a turn with the Philadelphia Flyers where he played 63 games with 8 goals, 12 assists for 20 points.

Johan Larsson joins the team after playing with the Buffalo Sabres in 62 games with 6 goals, 12 assists for 18 points.

John Hayden joins the team after playing with the New Jersey Devils in 43 games with 3 goals, 1 assist for 4 points.

Drake Caggiula joins the team after playing with the Chicago Blackhawks in 40 games with 9 goals, 6 assists for 15 points.

The Coyotes have the chance to be a very exciting team to watch this season.

They need Phil Kessel to improve upon last season.  In 70 games Kessel had 14 goals and 24 assists for 38 points.

Kessel, who turned 33 in October, may be out of his prime years but he still has more to give with the team. Kessel returning to his 50 point plateau would help the team in the scoring department.

Oliver Ekman-Larsson also has room to improve this season. Last year he only had 9 goals, 21 assists for 30 points, which is low for the offensive defenseman. Ekman-Larsson is the quarterback on the Coyotes power play, where he has shone in previous years.

Darcy Kuemper will need to be as lights out as he was last season to help the Coyotes get back into the playoffs. In 29 games played he had a goals-against average of 2.22 and a save percentage of .928.

One of the keys to success this season will be healthy goaltending from both Kuemper and Antti Raanta.

Darcy Kuemper has been the starter for the Coyotes over the past few seasons and that won’t be changing any time soon.

With the way the schedule is lined out having three competent goalies in your lineup will make them successful and the Coyotes have that in Kuemper, Raanta and Adin Hill.

If Kuemper can stay healthy and at the level of play he was at towards the end of last season, he will be able to assist the Coyotes into the playoffs once again.

The Coyotes didn’t have much movement when it came to their defensive pairings in the offseason.

Ekman-Larsson’s defense partner, Ilya Lyubushkin has not made it to Arizona yet due to a visa issue, but should hopefully be here soon.

Victor Soderstrom is another interesting name that the Coyotes have called into camp. Coming off of a great World Juniors Tournament, Soderstrom is currently in the NHL’s quarantine. There is a chance that he is either sent to Tucson to play with the Roadrunners or be on the taxi squad for the NHL team.

Jakob Chychrun is starting to enter his prime and has the possibility of becoming the powerhouse defenseman people saw the year he was drafted. In 63 games played last season, he had 12 goals, 14 assists for 38 points, a 10 point improvement from the year before.

The Coyotes forward group is unique in that they will need to score by committee this season over having just the stars score. The Coyotes have always been in a pack mentality when it comes to scoring, especially over the last few seasons.

Clayton Keller and Nick Schmaltz have the chance to show the NHL that they are amongst the top players in the league this year.

Christian Dvorak also seems like he is just waiting to shine this season. In 70 games he has 18 goals, 20 assists for 38 points.

Chemistry with the new players may take a few games, but the outlook for the forward group is bright.

Notes from the Scrimmage

Team White during the White/Black scrimmage walked away with a 5-0 win.

Hayden opened up the scoring just 1:40 into the first period.

Ekman-Larsson fed the puck to Jan Jenik who finished the goal on his knee to make it 2-0 4:43 into the second. Shortly after that goal Dvorak makes it 3-0.

Dysin Mayo made it 4-0, but it may have been tipped by Dvorak on it’s way past goaltender Ivan Prosvetov.

Phil Kessel made it 5-0 in the third period with his signature snapshot over goaltender Zane McIntyre’s glove.

The Coyotes season starts on Thursday, Jan. 14 against the San Jose Sharks at Gila River Arena.