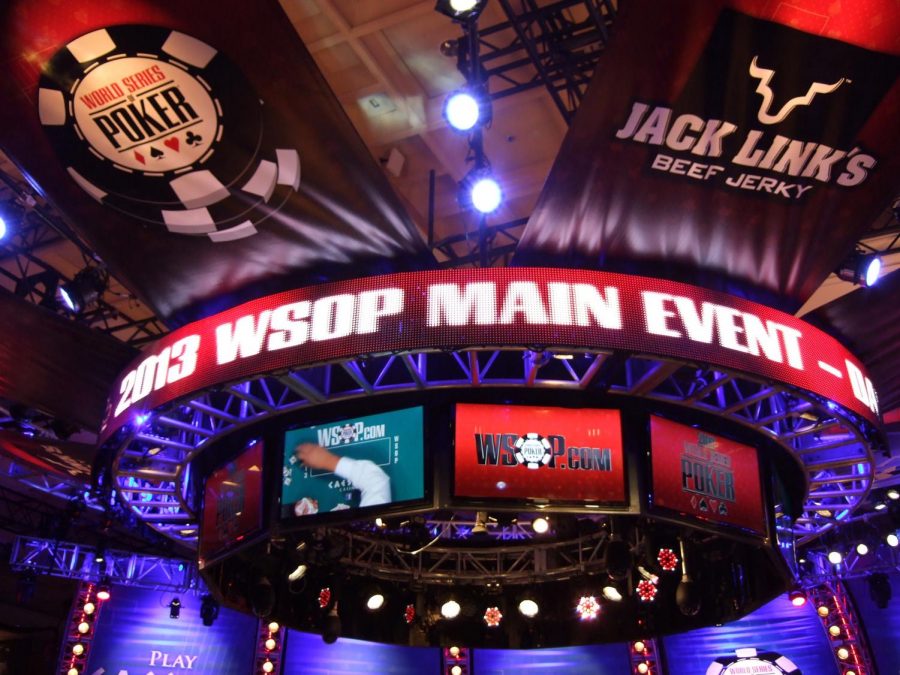 The display above a past main event final table

In the spring of 1970, the owner of the Horseshoe Casino in downtown Las Vegas, Benny Binion, had an idea. Why not gather all the best poker players in Las Vegas at one time and have a world championship tournament to determine the best player?

The World Series of Poker was born and took place every spring in Las Vegas from 1970-2019. There is no place and time with more poker action than Las Vegas during World Series time.

Players come from all over the country and the world to test their skills against the best and experience this one of a kind poker extravaganza.

Dozens of poker tournaments are held each summer at the WSOP. Entry fees generally range from $1,000 to $50,000 and anyone can enter.  Over 100,000 players participated in 2019. The winner of every WSOP tournament receives a coveted gold bracelet. Dozens of bracelets are won every year, however only one special bracelet, for winning the Main Event is awarded each year. The winner of the Main Event is known as the World Champion of Poker for that year.

Covid-19 wreaked havoc with the sporting event calendar this year and the WSOP was no exception.

The WSOP decided to postpone their live spring and early summer event until an undetermined date in the fall. In the meantime, they held a bonus online summer series awarding 85 bracelets to the winners of each online poker event. However, in order to play you had to be physically present in either Nevada, New Jersey or in a foreign country that permits online poker.

After the fall came and went without a clear path to hold the WSOP as usual, a decision was made. The bulk of the 2020 WSOP would not be able to be held, but a 2020 Main Event had to be held and a 2020 Poker World Champion would be crowned.

The winners of those two final tables, already each winning approximately $1.5 million, would meet at the Rio in a heads-up match for an additional prize of $1 million.

The International final table of nine became eight when Chinese citizen Peiyuan Sun was not allowed to travel to the Czech Republic in Europe. Sun was awarded ninth place money. The international winner was Damien Salas of Argentina. Salas,45, notably made the Main Event final table in 2017, winning over a million dollars.

The USA final table of nine was also one player short, as Upeshka DeSilva tested positive for Covid-19. He was not allowed to participate at the final table but was awarded the ninth place purse of $98,813. DeSilva has won three WSOP bracelets during his poker career. The USA final table was held on December 28, 2020 and the winner was Joseph Hebert of Metairie, Louisiana. Hebert dedicated his WSOP Main Event to his mother, who he unexpectedly lost last summer due to a pulmonary embolism.

Herbert talked to his mother about his dream to win a WSOP bracelet in their final conversation.

The heads up match between Salas and Hebert was originally scheduled for December 30, but had to be postponed until January, as Covid-19 travel restrictions caused International winner Salas’ travel plans to be upended.

The two combatants finally got together at the Rio in Las Vegas on Sunday. At one point, Herbert had an 8:1 chip lead. Salas however won several all-in hands in a row to even up the match. After a lengthy heads-up, No-Limit Hold’em battle, Salas went all-in before the flop on hand #173.  His KJ made a full house to beat Hebert’s AQ and make him the World Champion of poker in an unprecedented, topsy-turvy season the likes of which the world hopefully never sees again.