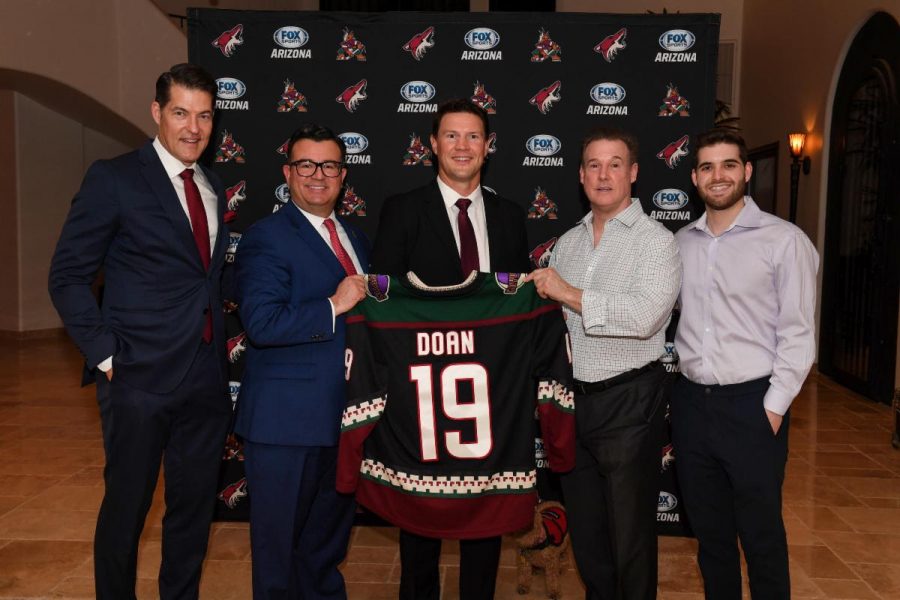 Courtesy of the Arizona Coyotes

Shane Doan wit the front office of the Arizona Coyotes

Today the Arizona Coyotes announced that Shane Doan will be the new Chief Hockey Development Officer.

“We are very excited to welcome Shane Doan back to the Coyotes organization,” said Coyotes Owner, Chairman & Governor Alex Meruelo via the press release. “No one has done more for the Coyotes or for the game of hockey in Arizona than Shane. We look forward to working with him for many years to come.”

“Shane Doan is a Coyotes legend and a Valley icon,” said Coyotes President & CEO Xavier Gutierrez via the press release. “For the past 25 years, Shane has been an incredible ambassador for our franchise and has represented the Coyotes with dignity and class. He is beloved by our fan base and we are thrilled to have him back with us where he belongs.”

“Shane Doan was a great player who played 21 seasons in the NHL,” said Coyotes General Manager Bill Armstrong via the press release. “He is highly respected around the League and has a wealth of hockey knowledge to share. He will be a valuable addition to our hockey operations department and I’m really looking forward to working with him.”

“I am very excited and grateful for this opportunity,” said Doan via the press release. “I am extremely proud to have played my entire career for the Coyotes and all I want is for this franchise to be successful on and off the ice. The Valley is an incredible hockey market with a loyal and passionate fan base and with Mr. Meruelo, we now have strong and stable ownership and a very bright future in Arizona. I’m looking forward to working with Mr. Meruelo, Xavier and Bill and I can’t wait to get started.

“I’d also like to thank Gary Bettman, Bill Daly, Colin Campbell and the NHL’s hockey operations department for the incredible opportunity to work for the League the past three years. I was able to gain invaluable experience that helped prepare me for this opportunity with the Coyotes.”