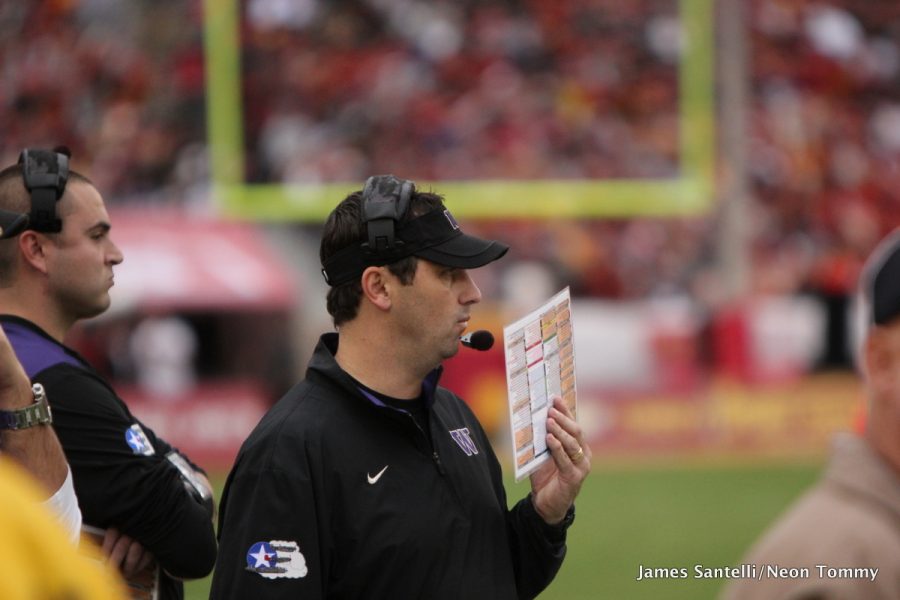 Steve Sarkisian during his tenure at University of Washington

Only a few short weeks removed from the collegiate gridiron season and a head coaching hiring and firing bonanza has put several high-caliber coaches on the chopping block or the road to success.

Alabama Crimson Tide head coach Nick Saban, has a history of taking promising, young coaches under his wing. Many of them have gone on to become head coaches themselves — Lane Kiffin, Mark Dantonio, Jimbo Fisher, and recent Texas Longhorn hire, Steve Sarkisian.

Sarkisian is succeeding Tom Herman, who led the Longhorns to a 32-18 regular-season record and was a perfect 4-0 in bowl games — significantly better than his predecessors.

Major news comes out of the Southeastern Conference as Auburn University has fired long-time Tiger icon, Gus Malzahn, and replaced him with former Boise State head coach, Bryan Harsin. Harsin coached the Broncos to a 69-19 record with a New Year’s Day, Fiesta Bowl win in 2014, while staying within the Top 25 throughout his tenure.

Malzahn spent eight years with the Tigers but struggled to bring home trophies in the postseason with a 2-5 record.

For reveling Sun Devil fans, the future of the AU Wildcats success is still in rebuilding mode. Kevin Sumlin was fired most of the way through his third season at the University of Arizona after his team was dismantled by ASU in this year’s Territorial Cup game. He set a career-low record during his tenure at Arizona with a 9-20 record and no bowl appearances.

Sumlin is replaced by Jedd Fisch who has spent the last decade as a position players coach in the NFL. The Arizona job will mark his first head coaching gig.

Several other moves took place this offseason such as Bret Bielema moving to Illinois, replacing Lovie Smith.  Terry Bowden is taking the reins at the University of Louisiana Monroe.  Shane Beamer will take the helm from Will Muschamp at the University of South Carolina.

On Wednesday, Josh Heupel left the University of Central Florida to fill the coaching vacancy at the University of Tennessee after the termination of Jeremy Pruitt.  Heupel’s exit creates another high-level opening in the UCF athletics department who are currently also searching for a new Director.