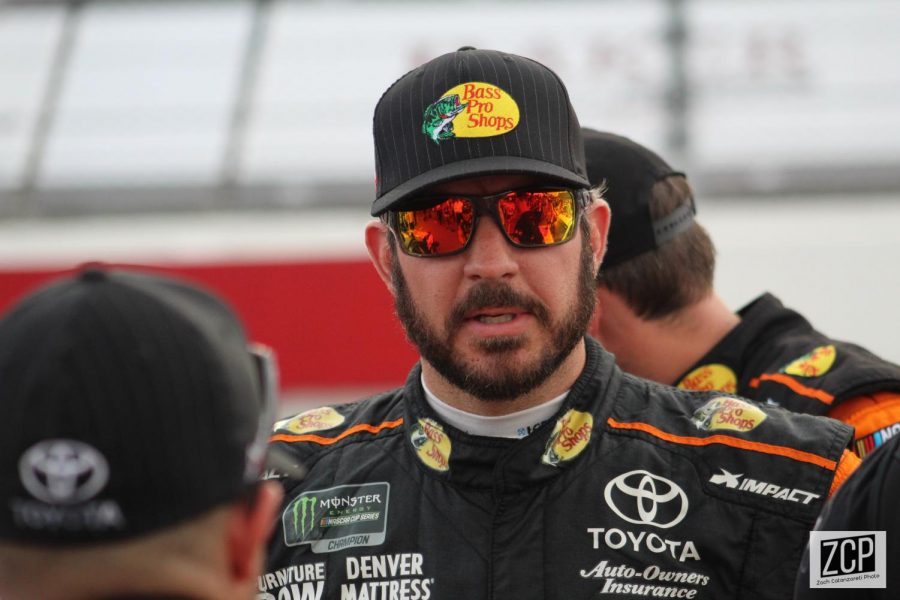 Last weekend’s race at “The Paperclip” did not disappoint.

After a strong showing at the Food City Dirt Race two weeks ago, Daniel Suarez would fail a pre-race inspection and lose his crew chief after an extra ballast was found.

He and four other drivers would shift to the rear for the drop of the green.

Joey Logano started on the pole with Denny Hamlin right beside him in second.

However, Hamlin wasted no time in taking and stretching the lead.

After a late drop of the green flag on Saturday, the race would run 42 laps until rain caused NASCAR to postpone the end of the race until 4 p.m. EST on Sunday.

The Blue Emu Maximum Pain Relief 500 resumed on Sunday shortly after the projected time, and continued to be very entertaining.

Following the start on Sunday, Ryan Blaney would creep onto Hamlin’s door, and take the lead.

From there, Blaney would lap all but 22 in the first stage, and all but 16 in the second, and sweep the stages.

After being one of the additional cars to shift to the rear, Tyler Reddick would again be the hard charger for the race, and finish in eighth place, despite having to climb from thirty fifth.

Those were not the only cautions though, as a 14 car pile-up would draw the race’s fourteenth yellow flag.

From rain and fire, to heavy damages, Martinsville had brought it all to the table.

After the race’s fifteenth and final caution the sprint for the checkered flag began.

Hamlin would take the pole next to teammate Martin Truex Jr., eventually getting overtaken on lap 483.

Hamlin would slip to third after Chase Elliot worked his way past him and drew within 2.15 seconds of Truex Jr.

Truex Jr. managed to outlast Elliot for the checkered flag and his second victory of the season — making it a truly big day at Martin’s Ville.

All three major series return next weekend at Richmond for their second short track race in as many weeks.