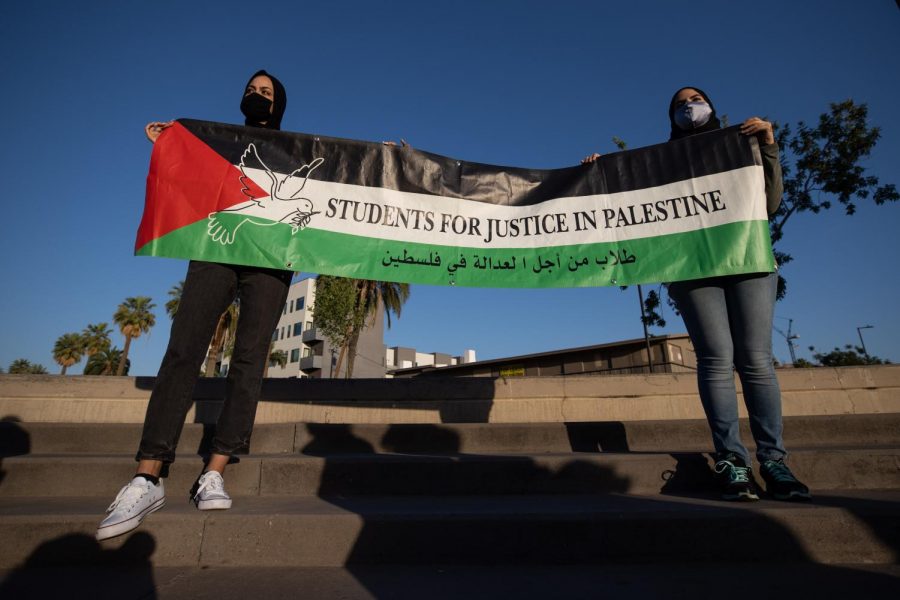 Pro-Palestinian holding a sign "Students for Justice in Palestine"

On Tuesday, May 18, more than 100 people gathered at Margaret T. Hance Park in Downtown Phoenix to stand in solidarity with Palestine during the most recent conflict with Israel.

The organizers started the rally by naming those who have lost their lives following a moment of silence.

Pro-Palestinian rallies took place around the world in recent days.

Hussain, a supporter of the movement, spoke to Northeast Valley News about what he feels are unjust evictions of Palestinian families and air strikes by Israeli forces.

“This is Arabic-Palestinian land, it should not be taken from them. They [Jews] come from all over the world to come and take their land from them. That’s not right. It’s Arabic land,” he said.

According to USA Today, the recent violence stemmed from Israeli attacks on Al-Aqsa Mosque during the final week of Ramadan, the holy month celebrated by Muslims, and the home displacement of Palestinian families by Israeli settler groups.

The same source reported that during an emergency meeting of the U.N. Security Council, U.N. Mideast envoy Tor Wennesland told the council that 34,000 Palestinians have been displaced from their homes.

According to The Washington Post, Israeli Prime Minister Benjamin Netanyahu vowed on Sunday to not cease military operations regardless of the international outrage it might create.

President Biden tweeted the day before his “strong support for Israel’s right to defend itself against rocket attacks from Hamas and other terrorist groups in Gaza, and condemned these indiscriminate attacks against Israel”

Today, Israel and Hamas agreed to a ceasefire, due to diplomatic talks between U.S. President Biden, who urged Prime Minister Netanyahu to de-escalate the conflict, according to Vice.

The ceasefire follows 11 days of bombings, clashes between Israeli and Palestinian forces and casualties due to air strikes.

Since the U.S. doesn’t have diplomatic contact with Hamas, mediators were crucial to the success of the talks.