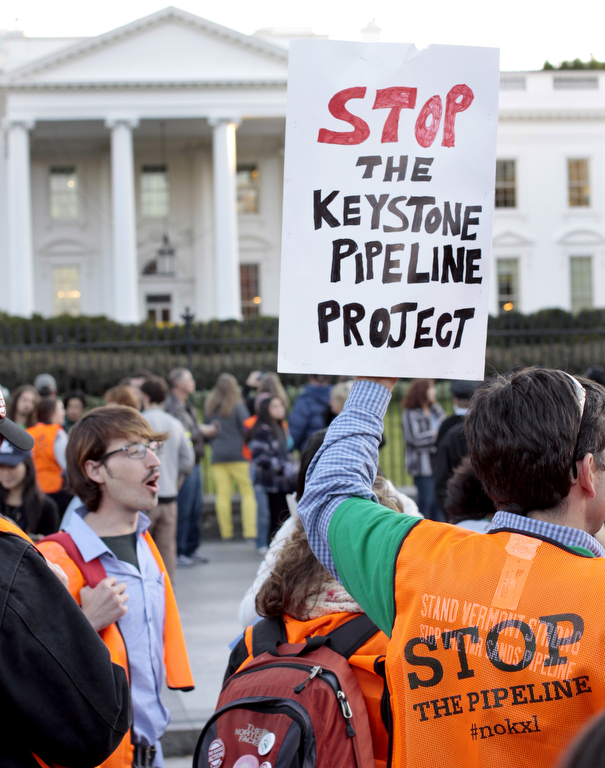 Protestors outside the White House demonstrate against the Keystone XL project in 2011. Pipeline construction began in 2008 and was spread across several phases — the last of which was shut down earlier this year.

TC Energy confirmed Wednesday that its Keystone XL project is no more.

The Calgary, Alberta-based corporation has announced its plans to abandon the $9 billion oil pipeline after President Joe Biden revoked its United States permit immediately upon entering office in January.

Construction on the pipeline began in southeastern Alberta in 2008, and several phases had been completed before TC Energy’s decision to back out. The latest phase would have seen fresh pipe laid down in Alberta before coursing through Montana and South Dakota before joining other segments of the Keystone network in Steele City, Nebraska.

“The Keystone XL pipeline was a giveaway to foreign oil lobbyists that put our communities, environment, and tribal lands at risk,” Sen. Elizabeth Warren tweeted. “I’m glad it’s dead, and I’m grateful to everyone who fought to make this day happen.”

Indigenous and non-indigenous activists fought the pipeline’s construction tooth-and-nail over the past decade. Concerns were voiced over the privately-financed project’s potential environmental impact and the risk of contamination within local communities. Former president Barack Obama rejected the expansion proposal in 2015, but successor Donald Trump’s administration gave TC Energy the required permits two years later, touting the project’s job-creation potential as a net-positive.

Obama had said the pipeline’s construction would not lead to long-term job opportunities or lower the price of oil for consumers — a key talking point for the pipeline’s proponents.

“Congratulations to the Indigenous communities & activists who for a decade have said #NoKXL,” former Senator and presidential candidate Al Gore tweeted. “We must continue to put the planet and its people ahead of polluters by saying no to #ByhaliaPipeline, #DAPL, #MVP, #Line3 & other reckless fossil fuel pipelines.”

However, not all factions celebrated the pipeline’s demise.

“This is yet another example of the Biden-Harris Administration putting the priorities of radical environmental activists above our national interest,” Nebraska governor Pete Ricketts said. “Without Keystone XL, the United States will not only be more dependent on overseas sources of oil, but our state will not enjoy the benefit of the jobs and property tax revenue the project would have brought.”

The American Petroleum Institute — which spent over $5 million in lobbying efforts in 2020 — also blasted Keystone XL’s shutdown on social media. Meanwhile, activists buoyed by the decision are now set to take aim at similar projects such as the Dakota Access Pipeline.