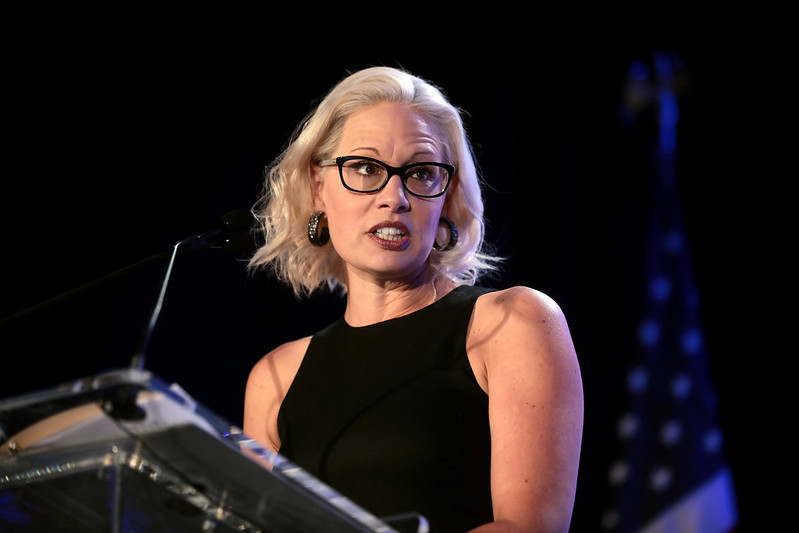 U.S. Senator Kyrsten Sinema speaking with attendees at the 2019 Legislative Forecast Luncheon hosted by the Arizona Chamber of Commerce & Industry at the Arizona Biltmore in Phoenix, Arizona.

One Arizona Democratic insider tells Northeast Valley News that in order to understand the motives of United States Senator Kyrsten Sinema (D-AZ), one must understand how to “just follow the money.”

According to one long-time Arizona political insider and former state elected official who wishes to remain anonymous, the phrase “follow the money” is “the absolute appropriate expression” when it comes to comprehending why Sen. Sinema, once a progressive democrat, would decide to vote against her own party platform.

“My support for retaining the 60-vote threshold is not based on the importance of any particular policy. It is based on what is best for our democracy,” Sinema wrote in an op-ed on Monday. “The filibuster compels moderation and helps protect the country from wild swings between opposing policy poles.”

Reportedly, corporate lobbyists including the National Restaurant Association have compensated Sinema as well as U.S. Senator Joe Manchin (D-WV) for voting “against Democratic policies that seek economic and racial justice.”

“If you want to know what’s up with Kyrsten Sinema and her refusal to solidly back the “For the People Act,” as well as her recent despicable “look at me” vote against minimum wage…you should begin by investigating the coffers of her own political campaign,” said the former Arizona Democratic elected official. “People, the press, need to keep a close eye on Kyrsten Sinema’s real motivation.”

Sinema claimed Monday to continue to support the For the People Act that would overhaul voting legislation, but is steadfast in her opposition to eliminating the filibuster to pass it without Republican support in a 50-50 Senate chamber. On Tuesday, 10 people were arrested outside Sinema’s office as they protested her continued defense of the unpopular Senate mechanism.

“To those who want to eliminate the legislative filibuster to pass the For the People Act (voting-rights legislation I support and have co-sponsored), I would ask: Would it be good for our country if we did, only to see that legislation rescinded a few years from now and replaced by a nationwide voter-ID law or restrictions on voting by mail in federal elections, over the objections of the minority?”

Sinema is set to be, per one columnist at least, another in a long line of white leaders that uphold the filibuster’s legacy.

The filibuster is seen by many Democrats as a “‘procedural roadblock’ and cements white minority rule for Republicans a procedure used against passing crucial legislation to protect Black Americans.” Martin Luther King once described the “white moderate” as a “stumbling block” to Black freedom. It has been further considered a tool used to “uphold slavery, kill anti-lynching legislation and block civil rights.”

Given the financial influences lining up to support Sinema, Arizona’s senior senator is leaning in favor of the GOP and going rogue against her own party. The veteran Arizona political insider believes that if Sinema goes through with her threats to keep voting rights in the hands of lawmakers and not the people, then she will go down as one of the biggest democratic obstructionists in Arizona political history.