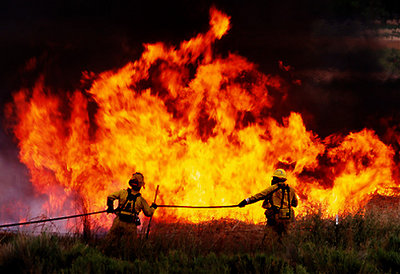 Update:  KTAR reports that evacuations and road closures associated with the Backbone fire have been lifted.  Residents of the affected communities were allowed to return home last weekend.

The Backbone Fire was started by lightning on June 16, northwest of Payson, Ariz.  The fire is currently threatening and has caused evacuation orders to be issued for the communities of Strawberry and Pine.  The fire has also forced the closure of Fossil Creek Recreation area and the evacuation of Hunt Ranch.

According to InciWeb, the fire had grown to 32,757 acres on Monday afternoon.  More than 300 personnel are giving highest priority to protecting the communities at risk on the eastern flank of the blaze.

Crews are also reportedly setting backfires along State Route 260 in an attempt to contain the fire to the north and extinguishing any fires which jump the Verde River to the south.

The fire is expected to continue to spread to the north and east while crews continue to strengthen the line of protection around Strawberry and Pine with hopes that it will hold if the fire reaches them.

KTAR News reported that Rim County Middle School in Payson has been established as an evacuation shelter and livestock can be sheltered at the Payson Event Center.

If you are traveling in the area, be advised that State Route 260 is closed both ways between Camp Verde and SR87 (Beeline Hwy).  SR 87 is closed from Payson to Lake Mary Road.