“I don’t want to put a limit on what I want to do”: Kim Cota-Robles makes history as Roadrunners’ first female PA announcer 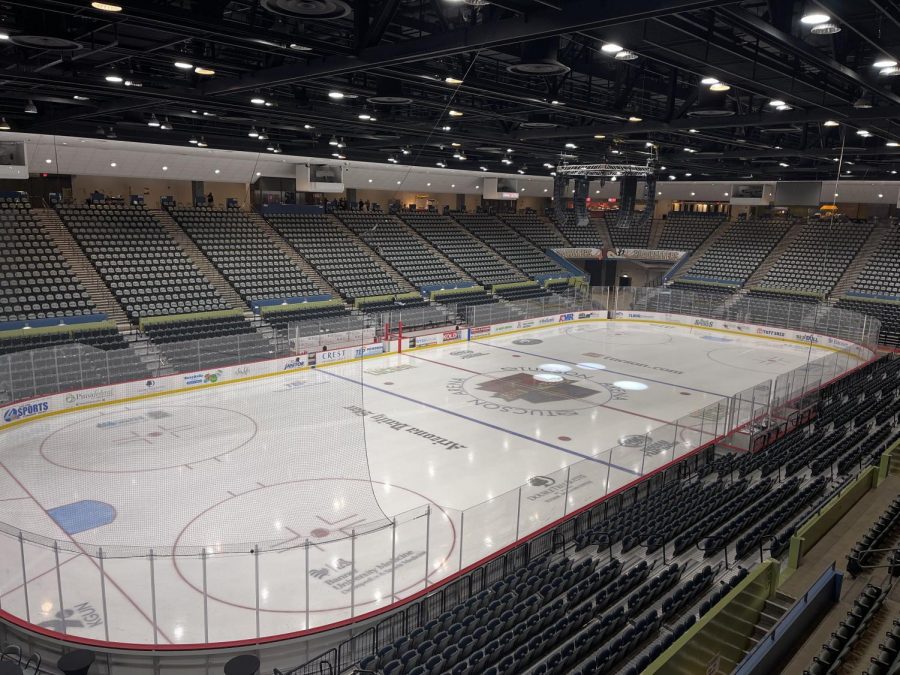 Kim Cota-Robles can remember the minute she fell in love with hockey.

“The team skated out onto the ice…and I got chills all over my body,” she told Northeast Valley News. “It was amazing, and I was hooked.”

Cota-Robles is in her first season as the public address announcer at the Tucson Convention Center. It is her voice that can be heard echoing throughout the arena during Tucson Roadrunners hockey games. She is among a small number of female PA announcers in professional sports. MLB teams such as the Oakland Athletics, San Francisco Giants, the New York Mets, and the Baltimore Orioles have female PAs.

But Cota-Robles, a former sports photographer at the University of Arizona’s Daily Wildcat as well as a former Lieutenant Commander in the United States Navy, is now the only female PA currently working in pro hockey.

“Good timing, I think it was just good luck,” she said about her new gig.

During her time at the Daily Wildcat, Cota-Robles shot basketball and football games before turning to hockey. She credits this as a formative experience, beginning her love for the game.

Cota-Robles rekindled her passion for hockey following her stint in the Navy.

“I dropped (my daughter) off (for skating lessons), and I was like ‘Well I guess I’ll walk around’,” Cota-Robles said. “I just so happened to walk through a door, and as I walked in, Sergei Fedorov came flying around the ice. And I was just like, ‘oh my God…the Caps (Washington Capitals) are in the building.

“(My daughter) knows I never watched her learn how to skate.”

Cota-Robles then set out to translate that excitement about a singular player into a career. But it did not happen all at once — it was a matter of getting up and going after it.

Cota-Robles took this advice to heart, and went on the lookout for opportunities.

“I got an email from the Jewish Community Center, that there was somebody that was going to be talking about how to get into voiceover work, some seminar,” she said. “I went to these classes that teach you how to get ready for auditions, and teach you how to market yourself, and brand yourself.

“One of the things they tell you is make a list of all the local companies that you are interested in working with, and reach out to them. Cold email, cold call. The Roadrunners were at the top of that list.”

That was the opportunity Cota-Robles eyed, and one she received on the eve of the 2021/22 season.

“It took me a year to write it out,” she said about approaching the organization. “I literally just got off my butt, three months ago, and sent that email.”

Once landing her new dream job, Cota-Robles found she had to adjust to the positions’s gregarious, outgoing demands.

“This is kind of a little bit of a character (I’m playing),” Cota-Robles said of her PA duties. “It’s not the voice I normally speak in. It’s so high energy. And honestly, when I come to games, I really enjoy them, but I am not the person who is trying to get on the Jumbotron. I’m not super outgoing.”

Brad Pfirrman, better known as Beef Vegan, has worked in arena entertainment for the Roadrunners for the past five seasons. Vegan worked closely with the Roadrunners’ previous PA — a man with “a big, loud, booming voice” — and commended Cota-Robles for her progress in the early part of the season.

“Something that I’ve witnessed, progression over each game,” Vegan told NEVN. “It’s like 100 percent better each game…how fast she’s been getting better has been immensely impressive.”

Vegan and Cota-Robles work in tandem over the loudspeakers during games — a strategy Vegan explained is a balance between tight planning and free-flowing improvisation.

“We just kind of play off each other and improvise, in a way,” Vegan said. “Being able to communicate back and forth is super simple, and super fun.”

She may not have seen her job with the Roadrunners coming, but now that she has blazed a new trail in the industry, Cota-Robles does not plan to stop anytime soon.

“I don’t know that I really have an endgame, because I really never had a ‘start game.’ I kind of take it as it goes, but I don’t want to put a limit on what I want to do.”