Tucson snapped its losing skid with a victory on Saturday 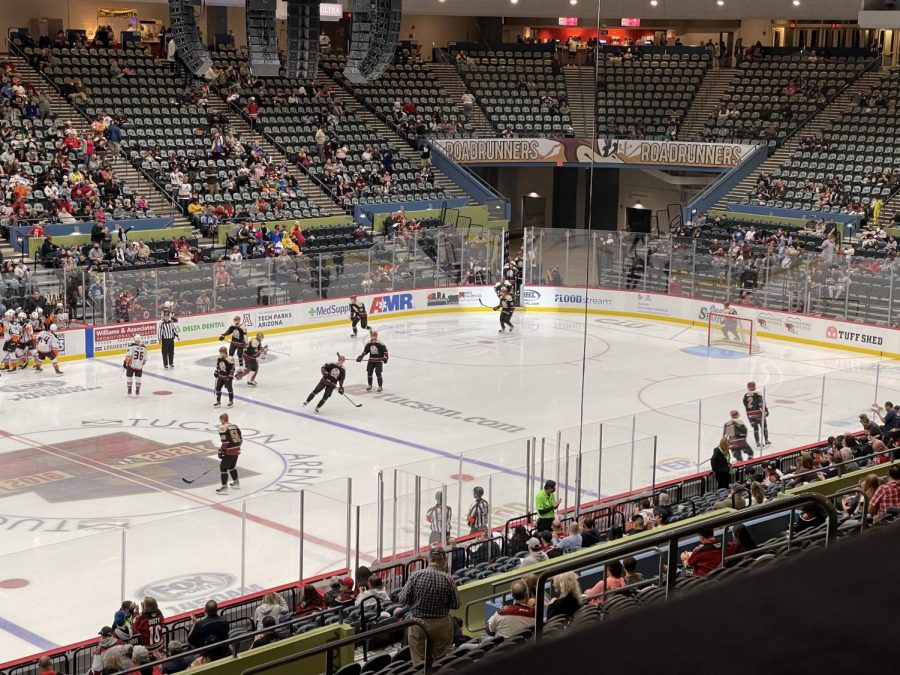 The Roadrunners, pictured skating at Tucson Convention Center Arena, met the Ontario Reign for a back-and-forth game over the weekend.

The Tucson Roadrunners, looking to bounce back from two losses against the Henderson Silver Knights, headed out to face the Ontario Reign at Toyota Arena on Saturday.

Ivan Prosvetov and Matthew Villalta were the game’s starting goaltenders, and it was the home team striking first on the night. Martin Frk‘s 13th goal of the season at 9:05 of the first period put Ontario ahead, with Vladimir Tkachev and TJ Tynan assisting.

Cameron Hebig wasted little time getting the goal back for Tucson. His fifth goal on the season came via a tip-in, and it tied the game at one apiece.

The game remained at one-all until the third period.

Michael Carcone scored his fifth of the season on a one-time shot just 62 seconds into the third period, but the Reign had an immediate response through Tynan. The former third round draft pick, also scoring for the fifth time in 2021/22, tied the game once more.

The back-and-forth period continued at 10:11, when the Roadrunners retook the lead only for the Reign to issue an immediate reply. Cole Hults snapped the puck past Villalta for his first goal this season, but at 10:51, Tynan centered the puck for Tkachev, who tied the game once again.

It would take overtime, but Vladislav Kolyachonok  landed the final blow to deliver Tucson the victory. He took a pass from Jan Jeník and snapped the pack through Villalta’s five-hole to end the game, a mere 59 seconds into the extra session.

The Runners improved to 10-9-2 on the year and were slated for another midweek series this week, north of the border with the Abbotsford Canucks. However, the American Hockey League on Monday announced this series will be rescheduled due to mounting COVID-19 cases in the AHL and the NHL.