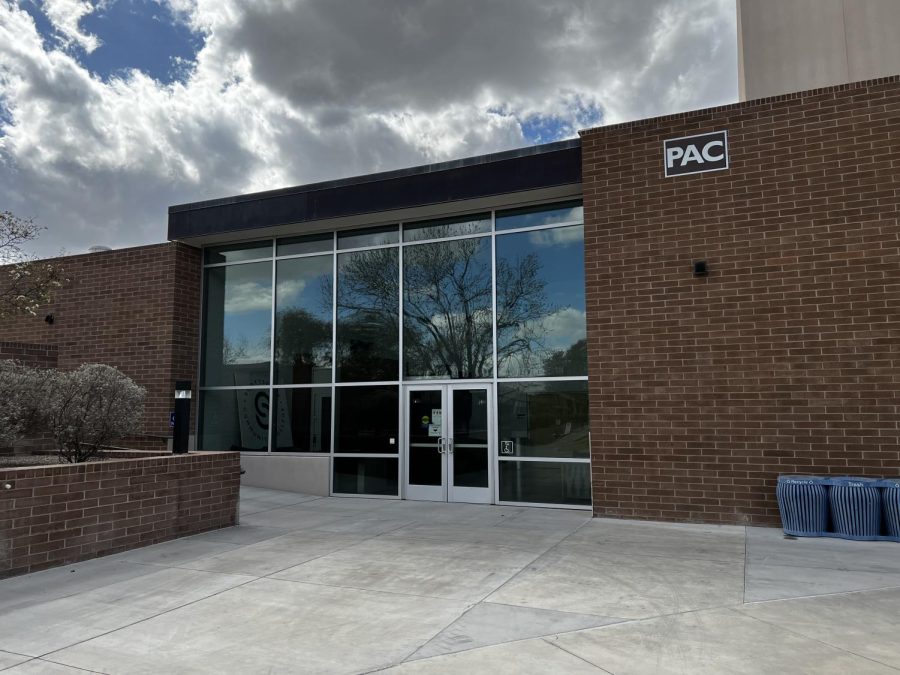 The Performing Arts Center at SCC.

The semester began with a successful run of a Roaring Twenties style rendition of William Shakespeare’s “Twelfth Night.”

This show was originally slated to run in early December but had to be pushed back due to health & safety precautions.

“Right before Thanksgiving, someone came down with COVID-19,” said Don Williams, head of SCC’s Directing and Performance Department. “We made an executive decision to move the production to the first week of this semester.”

The show was locked in for late January.

In a desperate attempt to keep any more productions from being delayed, Williams and crew continued to safely move forward.

“We started rehearsals [for The 39 Steps] the very next day,” Williams said.

The 39 Steps, is an adaptation of the novel and film version by John Buchan and Alfred Hitchcock respectively and was rewritten for the stage by Patrick Barlow.

According to SCC’s website, the play “mixes a Hitchcock masterpiece with a juicy spy novel and a dash of Monty Python, to create a fast-paced whodunit for anyone who loves the magic of theatre.”

Compiling a cast of 50 proficient actors who know their parts in and out is no easy task, but to be able to have just five individuals carry out that assignment is a testament to why the department is so highly regarded.

“The staff here is very friendly, they’re very good at guiding you in the right direction while also letting you be creative with it,” said one of the lead actors, Ashley Thomson. “I never feel lost or overwhelmed just cause if I fall, I know there’s a safe landing spot.”

Rounding out the spring semester is the annual student directed production.

Students within the Director’s Program are able to pitch ideas for a production they would like to put on and if selected are given the opportunity to do so.

“It’s a really cool opportunity. They get the full production value,” Williams said. “Costumes, set, props, lights, sound, they get a whole crew. It’s a really nice set up.”

This year’s feature will showcase “Long Way Go Down” by Zayd Dohrn.

The play, is “the story of a young Mexican couple who are trapped” at a way station when they can’t pay off their debts to the American coyotes who smuggled them across the border.”

Admission is free and seats can be reserved here for “The 39 Steps.”