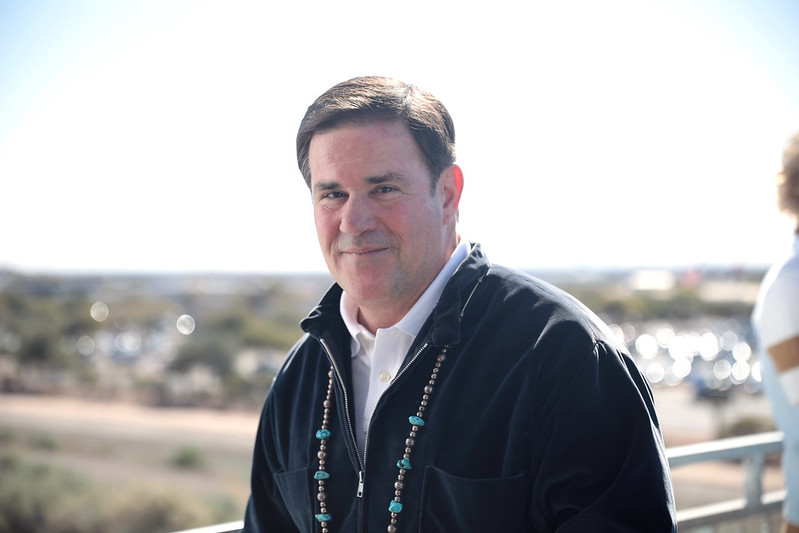 Governor Doug Ducey speaking with attendees at the 2022 Converge Tech Summit at The Waste Management Phoenix Open at the Skybar at TPC Scottsdale.

Arizona governor Doug Ducey on Thursday confirmed he would not run for the United States Senate in this election cycle.

Ducey, who is term-limited as the state’s governor, wrote in a letter to donors that he would not seek  federal office when his gubernatorial tenure ends in 2023. Arizona Secretary of State Katie Hobbs is the frontrunner to win the Democratic nomination in this year’s gubernatorial election, but the Republican race is not as clear-cut.

“We have a strong field of candidates in Arizona and I will be actively supporting our nominee — and perhaps weighing in before the primary,” Ducey said in his letter, which the Arizona Republic obtained.

Ducey has divided opinion within the GOP as a former ally of former president Donald Trump. The governor’s decision to certify Joe Biden’s victory in November 2020 enraged Trump and his base, though Ducey’s popularity has improved among Arizona voters.

As such, Kentucky Republican and current Senate Minority Leader Mitch McConnell had set out to convince Ducey to run against Democrat Mark Kelly. The junior Senator’s seat is in play this November.

“If you’re going to run for public office, you have to really want the job,” Ducey wrote. “Right now I have the job I want, and my intention is to close my years of service to Arizona with a very productive final legislative session AND to help elect Republican governors across the country in my role as chairman of the Republican Governors Association.”

CNN cited several contenders who could challenge Kelly for his seat in the midterm election. These hopefuls include Arizona Attorney General Mark Brnovich and Trump-affiliated Thiel Foundation president Blake Masters.

As for Ducey’s gubernatorial replacement, Kari Lake has polled well against Hobbs and could be considered the favorite to emerge from the crowded Republican primary in August. However, Lake has close ties to Trump and to far-right extremism. In December, Ducey clashed with her on the idea of installing cameras in Arizona classrooms.