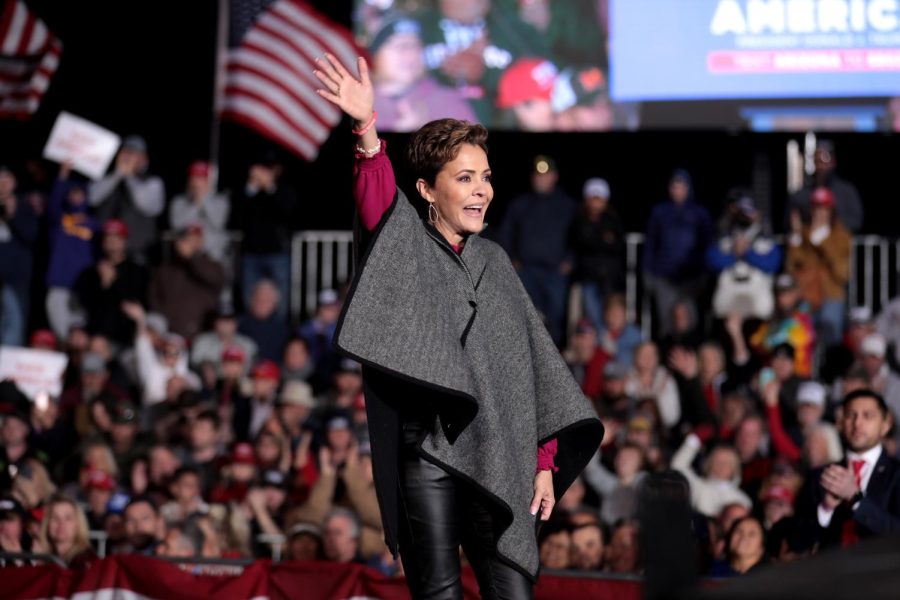 Kari Lake speaking with attendees at a "Save America" rally at Country Thunder Arizona in Florence, Arizona.

Kari Lake continues to try and strengthen her Trump ties as the months count down toward Arizona’s primaries.

Lake is no stranger to the world of Trump-inspired politics, as seen in her video message adoration of the former president.

She’s been a cornerstone of the ‘MAGA’ movement even before receiving Trump’s endorsement back in September of 2021.

Even after Trump’s evidenced defeat in his bid for a second term as president, Lake, and other Trump-backed hopefuls are still attempting to ride the “high” of the MAGA heyday.

Last Saturday was the second official rally of Lake’s campaign.

It was held in Morristown Arizona (population 227), a community northwest of Phoenix.

Lindell has been the controversial subject of pushing right-wing conspiracy theories and has racked up multiple lawsuits filed against him. The  “My Pillow Guy” for his end, has promised to personally sue numerous organizations including (a so far stalled attempt) to take the voting machine company, Dominion Voting Systems “all the way to the Supreme Court.”

Other speakers at the Lake rally included Arizona Rep. Paul Gosar (R) who was recently called out by several Republican leaders for attending and speaking at a white supremist, anti-Semitic, Pro-Putin event.

Both Lindell and Gosar repeated false claims regarding the 2020 presidential election.

“When your Governor Doug Ducey called the election good here in Arizona, with over 10 hours of evidence yet to be read, I sent him a text, I said lose my number,” Lindell said.

It remains clear that Lake has no plans to lose that base and some believe it will be Lake’s only base.

Though having just secured another big endorsement from heir apparent Donald Trump Jr, it may be harder for her to navigate this crowd than she previously thought.

Lake was allegedly set to speak at the third America First Political Action Conference, APFAC for short. AFPAC was founded by Nicholas J. Fuentes, a notable white nationalist figure among the alt-right whose rise came in 2017 when he attended the “Unite the Right” rally in Charlottesville.

Fuentes claims that Lake was not in attendance due to a scheduling conflict between it and CPAC, but Lake denied having any involvement.

“I am not part of this. I am not taking part. Just because a false photo is posted — you really should TRY to be a real journalist and ask before posting slanderous posts…oh, that’s right, Bram Renznik is a leftist, anti-American fool,” Lake posted on Twitter.

Many accuse Lake of using a former anchor position at a local FOX affiliate as a repeated journalistic “credibility” talking point, despite continuing to promote “serial lies” of election fraud—a claim that has no substantive evidence.

It is odd that Lake would vehemently deny being slated to speak and simultaneously not condemn the rest of her GOP colleagues—even inviting Rep. Gosar to speak at her rallies after he has appeared at AFPAC twice.

The cast of characters associated with Donald Trump have often been linked to this type of ideology, whether it be North Carolina Rep. Madison Cawthorn, Sebastian Gorka, Steve Bannon, or David Duke to name a few.

But even while drawing additional criticism for her comments about Arizona’s southern border, telling Newsmax “[Biden] is asleep at the wheel and doesn’t seem to care about the American people. He seems to care more about what’s happening in Ukraine,” Lake is still polling pretty well against the backdrop of other Republican Gubernatorial candidates.

According to Data Orbital, Lake is the only Republican gubernatorial candidate who is polling ahead of the likely Democratic candidate, Katie Hobbs.

The Arizona primaries are scheduled for August 2 with the election being held on November 8.

More information on how to vote can be found here.