The nation’s Jewish community outraged by Arizona Attorney General, Mark Brnovich’s suggested use of cyanide gas for state prison executions—cyanide is the same chemical used in the Holocaust—Arizona faces onslaught of lawsuits by Jewish and human rights organizations

Opponents accuse Brnovich, now a candidate for the U.S. Senate, of campaign tactics in his senate race such as calling for another investigation into the 2020 presidential election—despite his 2020 denial of any election fraud and subsequent election certification 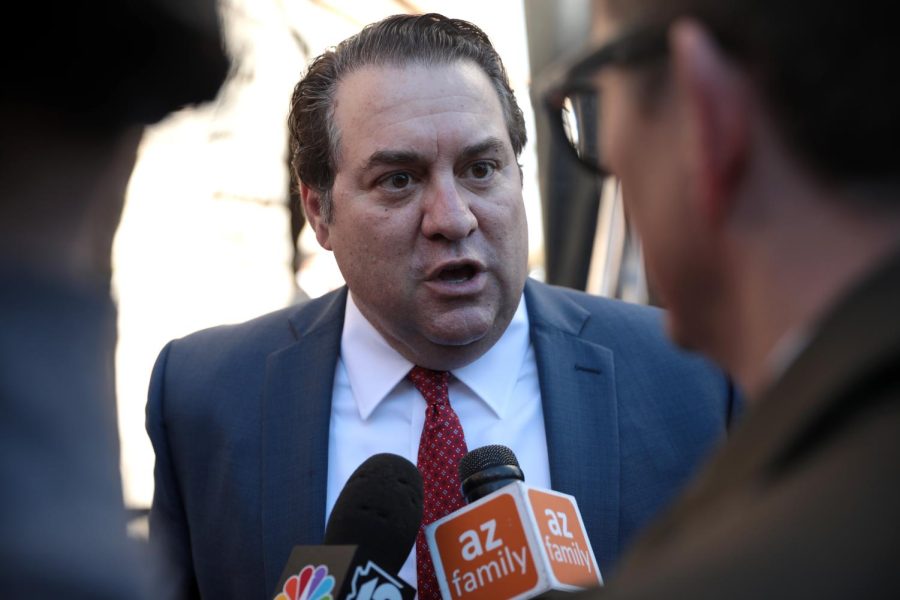 Arizona Attorney General Mark Brnovich (R) has made headlines recently after a series of controversial decisions.

Brnovich, who is not up for re-election, is using his last few months as Attorney General not only to push policy, but as a headline vehicle for a hopeful U.S. Senate run.

On Tuesday, the Arizona Supreme Court issued an execution warrant for Clarence Dixon.

Brnovich filed a motion in April of last year urging the Arizona Supreme Court to move forward on the potential executions of both Frank Atwood and Clarence Dixon. That initial request was denied in July of 2021, but was picked back up earlier this year after the Attorney General’s repeated attempts.

It seems Brnovich’s badgering has paid off.

The execution, which will be Arizona’s first in nearly eight years, is scheduled to take place on May 11.

The decision opened the door for Brnovich, to suggest methods such as the gas chamber and, more specifically—using Zyklon B— the same lethal agent used by the Nazi’s during the Holocaust, as a means of carrying out capital punishment.

“I made a promise to Arizona voters that people who commit the ultimate crime get the ultimate punishment,” Brnovich said in a statement.

Dixon was convicted in 2002 for the killing of Arizona State student Deana Bowdoin in 1978 and was already serving a life sentence for sexual assault in 1986.

In 2008 he was given the death sentence.

Dixon will have the option to undergo execution by lethal injection or gas chamber, each method having come under fire—but the cyanide gas recommendation has enraged the Jewish community.

Arizona hasn’t carried out an execution since 2014, when it took a nearly two-hour long lethal injection procedure to kill Joseph Wood. State officials agreed to refrain from using midazolam, the drug used in Wood’s botched execution, in future killings.

Brnovich has been named in a Feb. lawsuit by the Jewish Community Relations Council of Greater Phoenix as well as the American Civil Liberties Union of Arizona.

“Arizona’s decision to employ Zyklon B gas as a means of execution defies belief. While there can be no doubt about its effectiveness – the Nazis used it to kill millions of innocent Jews – it is that very effectiveness as an instrument of genocide that makes it utterly inappropriate for use by a civilized state in a proceeding sanctioned by the state and its judiciary,” the statement said.

“We need to keep in context why we have the death penalty. Just like Adolf Eichmann deserved to be killed and the other Nazis that perpetuated crimes against humanity deserved. I think society has a right to defend itself, and that includes executing those who commit unspeakable crimes,” Brnovich said.

“When I first heard this— it was a visceral gut reaction— that the state would even consider that we go to these barbaric, inhumane lengths. I am not a fan of the death penalty but this move of using cyanide gas is unconscionable.”

“There are Holocaust survivors and their families in our state and we would be requesting as a state for the most cruel and unusual punishment—these survivors and families are among the very taxpayers that must pay for this act? Are you kidding? This “proposal” by Brnovich physically turns my stomach,” Hartley said.

Brnovich has thrust himself into the spotlight with his cyanide gas recommendation along with his latest statements citing “concern” on a still unevidenced allegation of 2020 presidential election fraud in Arizona.

Brnovich opponents and many Arizonans are now skeptical of the senate candidate’s motive and his backpedaling on election fraud claims.

On Tuesday, Brnovich published an interim report directed at state Senate President Karen Fann (R) about his further investigation into the 2020 election.

Though Brnovich certified the election back in November of 2020, it seems he is now claiming concerns about the election.

Despite the mountain of evidence stating the integrity of the election was intact, as well as his own report, Brnovich still contends, “problematic system-wide issues that relate to early ballot handling and verification.”

But opponents see a more obvious tactic for Brnovich’s about-face.

The Republican attorney general turned senate candidate issued his latest report on Wednesday—his review of the 2020 election in Maricopa County outlined some of his misgivings, but fell short of providing clear evidence or major issues after more than six months of investigation.

“I will just tell you that no prosecutor worth their salt is going to reach a conclusion before they have evaluated all the facts and evidence,” Brnovich said on KTAR’s The Mike Broomhead Show.

Some accuse Brnovich of predictably speaking to a particular political base that serves his Republican bid for a U.S. Senate seat against other Republican primary hopefuls but ultimately a match up against Sen. Mark Kelly, D-Ariz.

“It’s laughable to even call this Brnovich statement a report. He is grandstanding on top of a fence that he doesn’t want to fall off of on either side. Brnovich won’t come out and say definitely this or that on his “report”—because he can’t. There’s no evidence in it. It should be called out for plagiarism because it’s nothing more than the same stuff previous reports have stated,” said former Arizona State Senator, Mary Hartley.

Arizona’s primaries will be held on August 2, 2022, with the General Election on November 8, 2022. More information on voting can be found here.