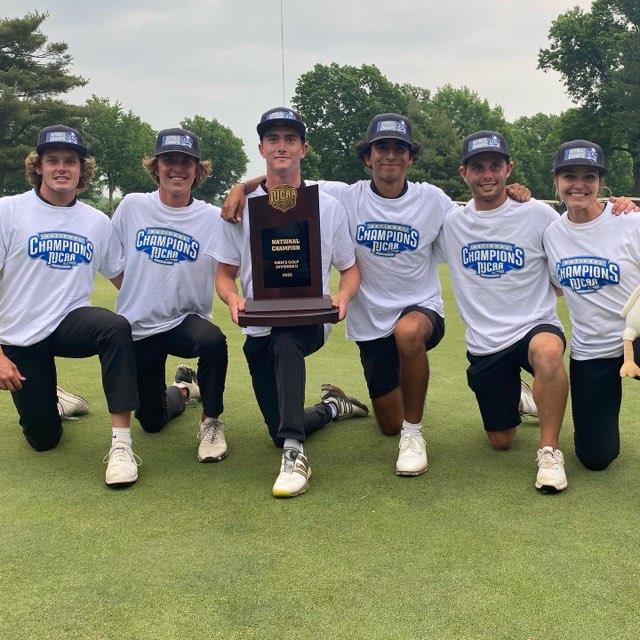 On May 20, Chelsea Carroll became the first woman in NJCAA history to lead a men’s sports team to a national championship when her South Mountain Community College Cougars Men’s Golf team won the title in Joplin, Mo.

“It’s an honor to be able to be the first,” said Carroll about the achievement.  “I hope it can inspire other women to do the same.”

South Mountain initially brought Carroll in to restart the women’s golf program in 2019.  She began with just two players that season and told Northeast Valley News that the program had blossomed to eleven players this season.

Carroll’s journey with the Cougar golf program really got interesting last summer, when the men’s coach accepted an opportunity at a DI school and the interim men’s position at South Mountain was offered to her, just weeks before the season began.

“A lot of these players weren’t expecting me to be their coach,” said Carroll about taking over the men’s program .  “It was a big learning curve for them.  It was a challenging time, I think, for everybody to kinda go through the change – but it was all worth it in the end.”

“Regardless of gender, I want to be the best coach for them, to make sure that they are moving on to the next level,” Carroll said.

According to Carroll, the differences between coaching men and women are not significant.

“They all want the same thing,” Carroll said.  “That’s to have a coach that cares, but also, to have a team that’s together and to have the stepping stones to their success in their careers.”

“Bringing the team together is really big for me,” Carroll said.  “It was really cool – and I think that is a strength of mine, is bringing both teams together.  The men are supporting the ladies at their tournaments and then the ladies are supporting the guys at their tournaments.  It’s a different type of motivation and I think that’s something that’s really special that I hope I provided for them.”

Carroll told Northeast Valley News that the pressure of Nationals was pervasive.

“The nerves are different,” Carroll said.  “We’re in a climate where it’s raining – there’s trees everywhere – no rocks, no desert…it’s a different feeling when you’re in a completely different environment.  Some of the guys have never been in a place or a course that has trees like that.  They’ve only played Arizona courses.”

Carroll wanted NEVN readers to know that she is thankful for the foundation that former coaches at South Mountain built and the support that she has received from the Junior College golf community.

She hopes the college will decide to remove her “interim” tag as men’s coach so she can move forward with her ultimate goal of winning the school both the men’s and women’s national championships in the same year.

“I would love to continue it on and hopefully bring back a national championship for the women and men – that would be amazing,” Carroll said.

This is the eight National Championship for the South Mountain men’s team.