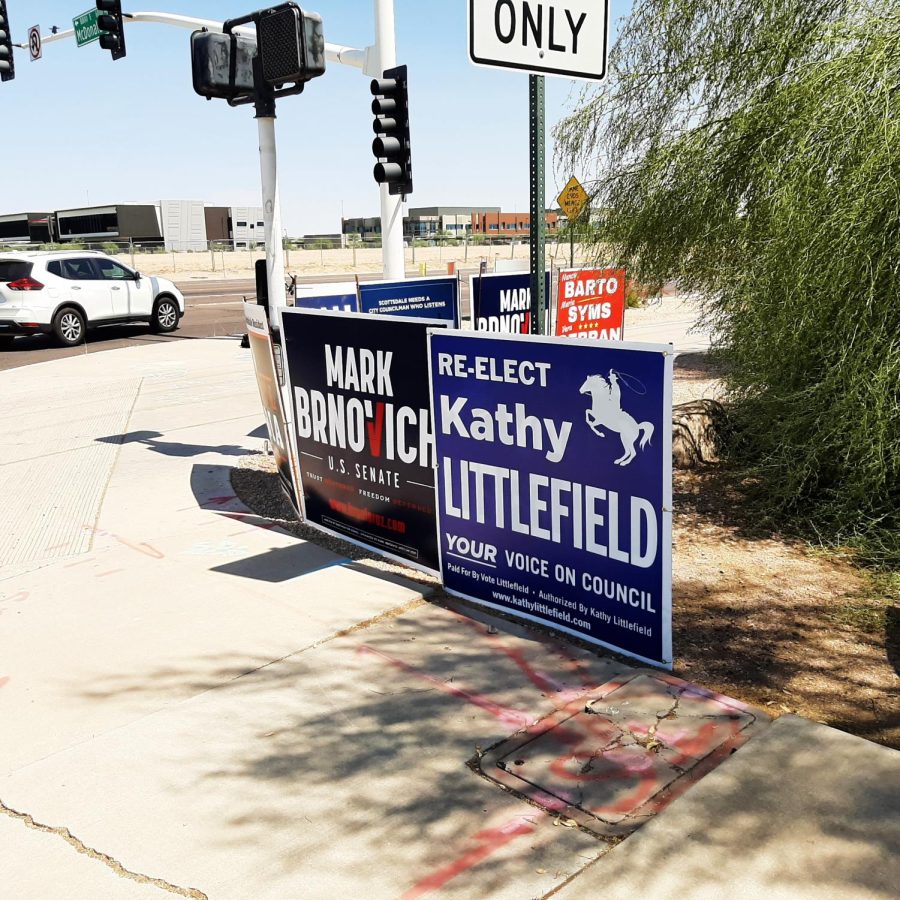 Under “normal” circumstances, the city of Scottsdale does not allow any temporary signs in the public right-of-way.

The city’s Sign Ordinance stipulates that temporary freestanding signs must be on private property or set back a minimum of 20 feet from the street curb or street improvement.  Also, signs over two feet tall are not allowed within a 25 foot “safety triangle” at street corners.

However, political election cycles are apparently not “normal” times.

According to the City of Scottsdale’s website, on April 4, 2011, the state of Arizona adopted Arizona Revised Statutes 16-1019 which prohibits municipalities from enforcing temporary sign laws during election cycles.

The statute reads that political signs which support or oppose a candidate or ballot measure may be placed in the public right-of-way during the above time period.

The law also states that signs should not be placed in a manner that is “hazardous to public safety” or “obstructs clear vision in the area”.

“Sometimes signs are put up and end up obstructing the clear vision for motorists who are trying to make turns at intersections,” Bolin said in the email.  “Such as the signs are so large or positioned in a way that a motorist looking to their left, cannot see oncoming traffic or pedestrians on the sidewalks on either side of them,” Boldin said in the email.  “Signs should be positioned in such a way that sidewalks and access to sidewalks are not obstructed for pedestrians and those who are using pedestrian assistance devices such as wheelchairs or motorized personal vehicles.”

Other sign requirements include having a maximum surface area of 16 square feet in residential zones or 32 square feet in commercial or agricultural zones.  The sign must also contain the name and telephone number or website of the candidate or contact person for the campaign committee.

Even though Scottsdale is required to abide by Arizona Statutes 16-1019, the city webpage dealing with campaign signs during the allowed time contains the following statement.

Furthermore, two, state-authorized “Sign-Free Zones” were established in late 2011.  One, encompasses portions of Scottsdale’s “Old Town” district and the other, further to the north, surrounds an area north of Frank Lloyd Wright Blvd. and south of Bell Rd.

Residents with concerns about unsafe or improperly placed campaign signs can contact Scottsdale’s Code Enforcement hotline at (480)312-2546, by email at codeenforcement@scottsdaleAZ.gov, or by using the city’s ScottsdaleEZ eservices site.