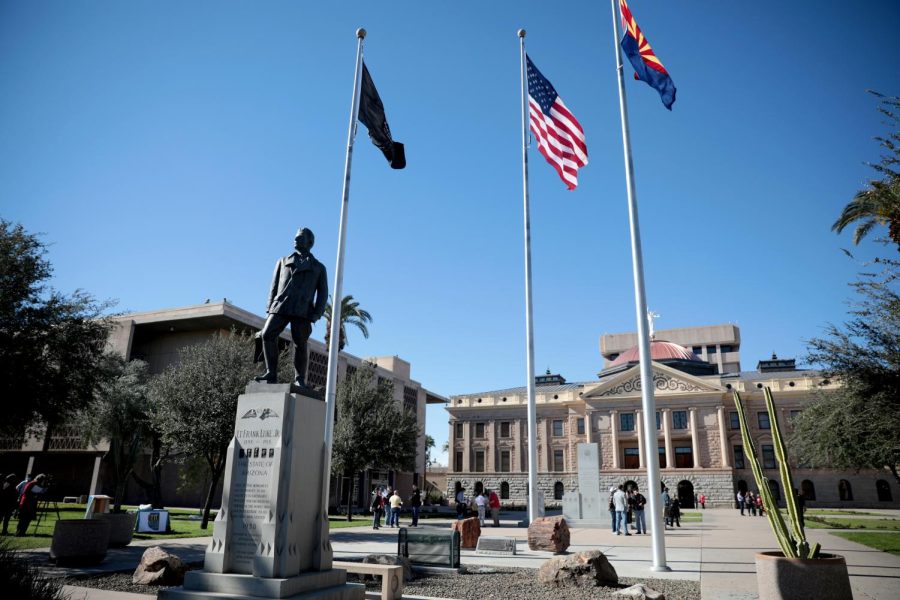 “If this is an example of Ms. Lake doing her due diligence, and thorough research, concluding in such an incredulous gaffe, God only knows what she has figured out about the Arizona Constitution and our statues,” said Senator Mary Hartley.

What is being reported as a “figment of Lake’s fevered imagination,” was a so-called  revelation that was to be announced on Tuesday by the Lake campaign—it was going to be something “painful” to hear from the Lake campaign about her gubernatorial opponent, Katie Hobbs.

The Lake campaign’s declaration alleged that Hobbs fought to keep the Pledge of Allegiance, the National Anthem, the Declaration of Independence and the Constitution out of Arizona’s classrooms while an Ariz. legislator.

But it isn’t true.

Reportedly, “Lake doesn’t know how to read a bill or know that proposed changes to state law are written in UPPER CASE (or blue type) while existing portions of the law are in regular type.”

Hobbs did not fight to keep any of the American patriotic traditions out of the classroom.

“It’s disappointing that somebody that’s running for governor can’t read state statue, especially for someone who claimed they triple-checked their facts,” Coughlin said.

Sen. Hartley also took issue with Lake’s comparison of herself to Jesus during a campaign speech.

“Using the name of Jesus Christ to make a political point is not only cheap…but down right blasphemy,” said Sen. Hartley after Lake’s recent public comparison of herself and MAGA followers — to Jesus.

Lake was campaigning in a religious environment when she made the comparison to Jesus.

Lake also made remarks about immigrants being drug smugglers and rapists and she ended her critical accusations with, “that’s a fact”.

The kind of words and descriptions Lake used with regard to immigrants are not typically heard from a Christian pulpit.

According to PoltiFact of the Poynter Institute, most fentanyl being smuggled into the U.S. from Mexico is coming in through official ports of entry, not by people crossing the border.

“The fact that the public believes them is, I think, mainly because the information they’re being told over and over by political leaders,” said Theresa Cardinal-Brown, the managing director of Immigration and Cross-Border Policy at the Bipartisan Policy Center.

Senator Hartley who served in the state senate from 1995-2003 wasn’t finished with her view of Lake’s outlandish assertions about Jesus or immigrants seeking asylum and said, “Ms. Lake is woefully unqualified to hold the office.”

“Kari Lake is nothing more than a parrot replacing “Polly wants a cracker” for anything Trump has said in his rants. Decades of Arizona Republican Governors have not “fixed” the border problem, nor Kari Lake’s overlord — Trump, with all his “barrier” promises,” Hartley said.

According to The Washington Post, Trump’s promise of a border wall built barely more than a dozen miles of new primary barrier and replaced prior or existing barriers on less than 400 miles.