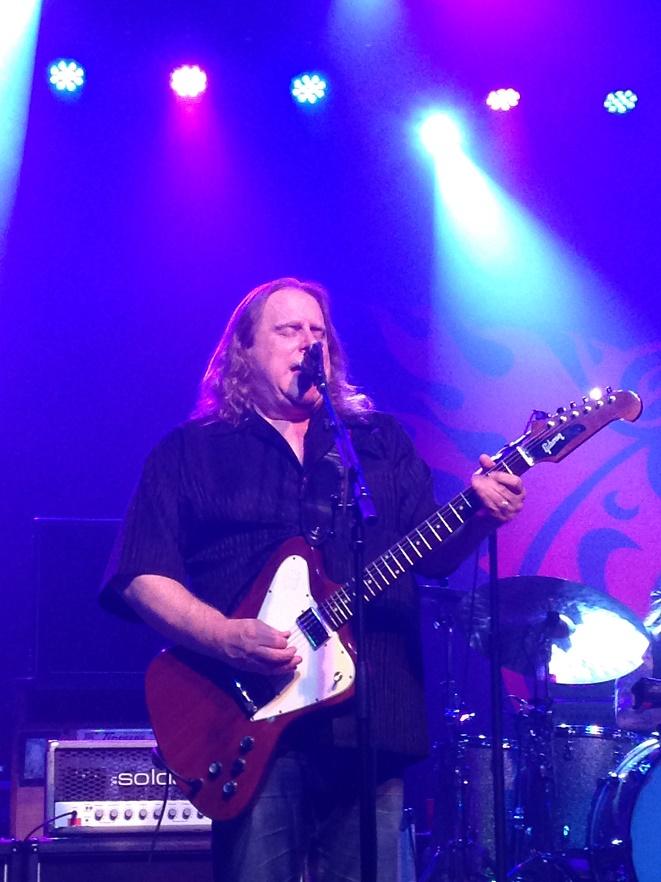 Gov't Mule guitarist and vocalist Warren Haynes performs during the first set of his group's concert at Tempe's Marquee Theatre on Sunday night.

On “About to Rage,” the third selection of Gov’t Mule’s first set at Tempe’s Marquee Theatre, guitarist and vocalist Warren Haynes sings “hesitation is a hole to the head.” And the deeper Gov’t Mule went, the more it seemed like that line is the group’s motto.

There is no hesitation in Gov’t Mule. One part jam band, one part progressive rock and one part Southern rock, Haynes and his group – now in its 21st year together – certainly do not compromise musically. Their first of Sunday night’s two 90-minute sets (punctuated by one 20-minute intermission) was fiery, blues-inflected and dominated by Haynes’ usually-electrifying guitar solos. The other members of the band – drummer Matt Abts, bassist Jorgen Carlsson and keyboardist Danny Louis – gave Haynes plenty of space to operate and display his versatility.

Haynes first rose to prominence in the 1990’s, during his stint with the Allman Brothers Band. The Southern rock titans were long the showcase for some of the genre’s great guitarists, including Duane Allman, Dickie Betts and Derek Trucks. Haynes clearly learned a thing or two playing with ABB, as his playing seamlessly alternated between hard-edged riffs (such as those heard on “Bad Little Doggie” and “Lola, Leave Your Light On”) and soulful licks (the aforementioned “About to Rage” and “Soulshine”).

Haynes and Gov’t Mule also do not compromise politically. “Don’t Step on the Grass, Sam,” a song the group has played almost since their inception according to Haynes, is unabashedly pro-marijuana. Of course, legalization has been a most controversial subject in the United States. In Arizona, it is a topic that has been brought straight to the Capitol’s doorstep. However, a very pro-legalization crowd responded enthusiastically to the song.

Gov’t Mule’s second set was more experimental and progressive in nature, which lent itself more easily to varied contributions from the non-Haynes members of the group. This was evident from the opener, “Done Got Wise,” and its distinctive bass line. The emphasis on Carlsson’s bass continued through the group’s cover of the Pink Floyd standard “One of These Days,” which was totally dominated by Carlsson’s juicy playing.

After an energetic Abts drum solo, Gov’t Mule pushed on through set closer “World Boss,” which is one of many songs from the show found on the band’s 2013 effort “Shout!” After an 8 p.m. start time, the show finally ended just after 11, once the encore of “Lay Your Burden Down,” complete with Haynes’ megaphone and Louis’ trombone, concluded.