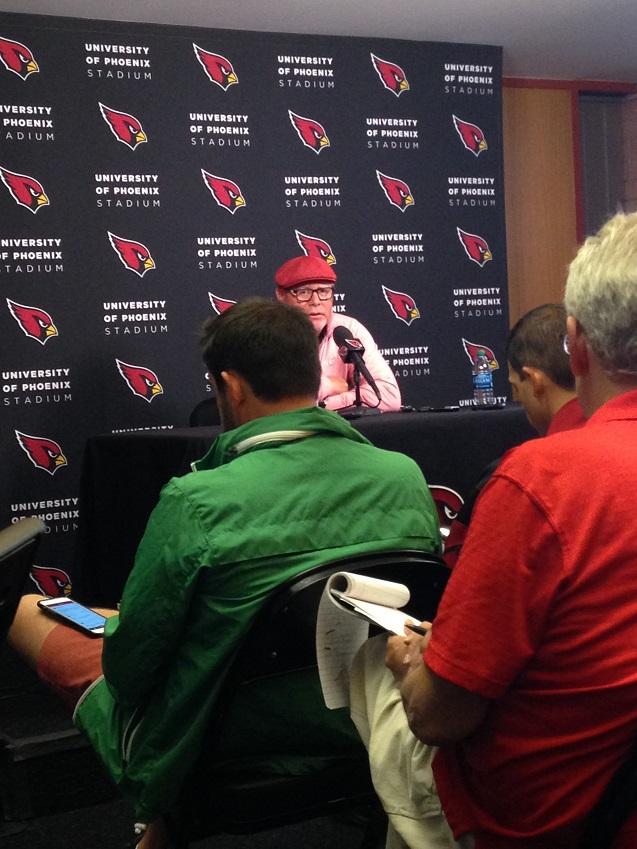 Arizona Cardinals head coach Bruce Arians speaks to the media at the team's practice facility in Tempe on Monday. The Cardinals defeated the Bengals 34-31 on Sunday night.

Arizona Cardinals head coach Bruce Arians walked into the team’s practice facility in Tempe on Monday afternoon to face the assembled media. The Cardinals, victorious again on Sunday, sit atop their division with eight wins from 10 games and are one of the favorites to play in Super Bowl 50.

Arians, however, was not positively aglow after the team’s last-second 34-31 win over the Cincinnati Bengals. Rather, he viewed the result through a rather critical lens.

“It’s gonna sound like a broken record, but I really didn’t like the way we played last night,” Arians said.

The Cardinals trailed at halftime in what was a largely disappointing display from a typically explosive offense. Quarterback Carson Palmer threw two interceptions in the first quarter and the Bengals entered the third quarter with a 14-7 lead. However, the Cardinals were a different team in the second half (as Arians explained, it was like night and day). Palmer threw three of his four touchdown passes over the final 30 minutes, including a 64-yard strike to rookie wide receiver J.J. Nelson.

“He’s just gonna grow and grow,” Arians said of Nelson. “The lights aren’t too bright for him.”

Nelson was one of three rookies who received game balls after the game, which ended with second-year kicker Chandler Catanzaro drilling a 32-yard field goal with one second left. Originally, Catanzaro was to attempt a 47-yard kick, but Bengals defensive tackle Domata Peko was flagged for unsportsmanlike conduct, moving the kick up 15 yards. Allegedly, Peko tried to simulate a snap count.

When Arians was asked if he had ever seen a penalty like that called before, he flatly replied: “No.”

In order to put themselves in a position to win, though, the Cardinals needed to make huge plays defensively. Rookie linebacker Markus Golden made one such play in the fourth quarter. With the Cardinals clinging to a 28-21 lead, Golden sacked Bengals quarterback Andy Dalton and forced a fumble that the Cardinals recovered. The offense then converted that turnover into a field goal, pushing the lead to 31-21. Golden, too, received a game ball for his play.

The second-round pick from Missouri went on to express his admiration for Arians’ character and the infectious winning mentality he instills in his players.

“He’s got a lot of confidence, a lot of swag,” Golden said.

The victory over the Bengals means the Cardinals maintain a three-game lead over the Seattle Seahawks in the NFC West division. The Cardinals are the only team in the NFL with a top-five ranking in total offense (second) and total defense (third). The team’s +120 point differential is second in the league, and Palmer is now four touchdown passes from breaking the franchise record for a single season. Despite Arians’ disappointment with the turnover margin, he was able to talk relatively candidly about his relationship with the veteran signal-caller.

“It’s more coach-player, but I’d have a drink with him,” Arians said.

The Cardinals will travel to Santa Clara, Calif. to face the 3-7 San Francisco 49ers next Sunday. When queried on how he would motivate his team against the struggling 49ers – a team the Cardinals have not had much success against in the past – Arians answered simply but powerfully.